Ladies and gentlemen, take two minutes to read this article and I promise that you will save anywhere from $20 to $100 this Christmas.

Some people around you will think that you are an incredible cheapskate.

If you have some sort of self-image problem or a problem with childish machismo, then stop reading this article right now; if you are confident of who you are in your self-image, read on.

Here’s a picture of our Christmas tree. Look at the Christmas presents. Aren’t they wonderful?

I admit that I’m incredibly frugal. Yet, I am not even close to the top of that mountain. I am but a mere “grasshopper.”

I’ll bet you a half-a-donut that guys like Jim Rogers are way more frugal than me. Rich people don’t throw money around like idiots. That’s why they are rich.

I do know one guy who is a multi-millionaire. He always picks up pennies whenever he sees them. So do I, under his advice. Unless you are nuts, you should too.

Yes, I’m a cheapo. So what? I’m a proud card-carrying member of the Cheapskates of the World.

My wife thinks I’m an incredible tightwad. Why, yes I am. Thank you very much.

A promoter who works for a very well-known record label here in Japan said I am, “A rich cheapskate.” My, my, and I admire her, too!

I never leave my house with even one yen in my pocket. If I want something, I’d have to borrow a few bucks from a friend. Borrowing is embarrassing, right? Right. So, I don’t do it. My co-workers think I am the ultimate skinflint. I blush. Will the flattery never stop?

No. It won’t, especially after this article.

My name is Mike Rogers and I’m a cheapskate. I’m a stinkin’ penny-pincher… And I’m damned proud of it too. 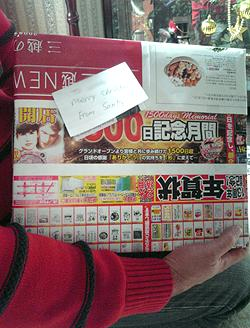 Yeah, yeah, laugh all you want. But the utter idea that wrapping makes a difference is total BS. I wrapped this stuff for my kid. It is totally and completely created from flyers that come with the daily newspapers. This costs me nothing but time and effort.

Unless you are a robot and under the thumb of the mass media, listen to me, and I will show you how to save the bucks that, when you stop and think about it, only an idiot could spend.

My son is so pleased. He is five-years-old now and can’t wait until Christmas. Oh, the treasures of youth! How I wish I could view the world again through the eyes of a five-year-old….

Come to think of it, I can.

Remember the wrapping paper of that Hop-a-Long Cassidy wristwatch your parents got you for Christmas? No? How about the cool silvery red paper on that Star Wars replica light-saber they bought you?

No? Can’t remember that either?

Or how about the green leafy thing with the red berries (which could be poisonous if you ate them) Christmas wrapping that you got for the Play-Station or whatever it was?

Hell, the wrapping paper don’t matter, right? Christmas was cool and you had fun. End of story, period. Wrapping paper? Who cares? Exactly!

Only an idiot would spend money on gift-wrapping…

(Disclaimer: Dudes! Have a clue. If it is a ring or whatever and you are going to do something you’ll regret, like proposing marriage, then spring the extra bucks for wrapping paper. Girls can be awfully fussy about this sort of thing).

Are you telling me that paying some part-timer to wrap the stuff you bought, instead of you, is better than me taking my time, cutting my damned fingers, getting pissed off at tape, is more heartfelt to do the same job?

I wrap the presents for my kid because I love my kid. There’s no part-timer in the world who will put more time into this process than me. What is the price of effort and love?

Readers, things are going to hell in 2008—2009. It’s time for all of us to go back to what Christmas really means. It means being together, spending time together and becoming “one.” It doesn’t mean spending money on stupid stuff that doesn’t matter.