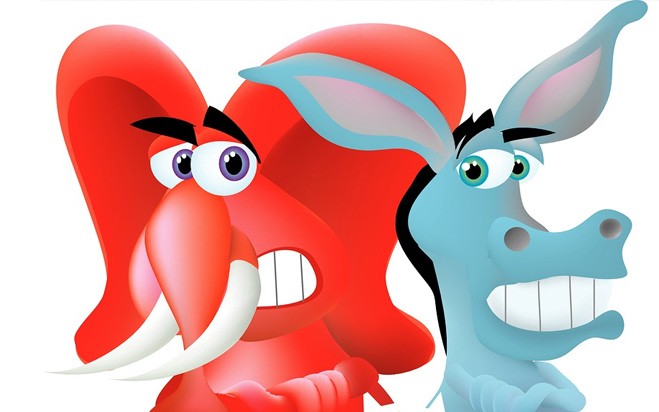 Why won’t those dummies on the other side smarten up and compromise by doing what we know is best?

That is the state of politics in the US of A, and has been for some time now.

These sharp differences of opinion aren’t really the problem that some make them out to be. Disagreements are part of a healthy democracy.

More problematic, is the lack of communication and respect between viewpoints.

There is a lot of name calling and “us versus them” talk today, in place of honest discussion.

And while I’m not proposing we all join hands and sing “Kumbaya,” maybe a bit more understanding wouldn’t be all bad.

So here are some suggested New Year’s resolutions for both the Right and the Left.

For liberals, maybe you should try to accept the fact that you’re not the non-conformists you think you are.

And for conservatives, perhaps you should consider that you’re not necessarily the irrefutable voice of “normal” Americans.

According to the journal Psychological Science, liberals tend to think their views are more rebellious than they really are.

Conservatives on the other hand, do not crave uniqueness, and are more likely to overestimate the consensus around their beliefs.

In other words, liberals bristle at the notion that they’re conventional thinkers, while conservatives are too quick to assume everyone thinks like them.

One of the most impressive achievements of liberalism is the myth of liberal rebelliousness.

This is perhaps nowhere more visible than in college students, who are a lot like the mob in Monty Python’s Life of Brian who chant, “We are all individuals!”

Meanwhile, people on the right seem to take it for granted that they are part of a vast majority pitted against a small group of elitist pinheads and would-be social engineers.

Although there are a lot of pinhead social engineers like former New York mayor Bloomberg. There are millions of Americans who see these people as leaders who speak for them.

Evidence for this is about as hard to find as hay in a haystack.

Liberals often talk as if only uneducated hillbillies disagree with them, and conservatives often assume that only overeducated radicals could object to their thinking.

Hence Barack Obama’s explanation for why more people didn’t support him: They were too busy “clinging” to their God and guns.

Tellingly, many conservatives took that line as a badge of honor.

Smugness is also a big source of political problems for both the Left and the Right.

Conservatives too often reject the need to persuade those who don’t already agree with them. And Liberals have become far too content with their feeling of unique goodness and that they know what’s best for you, better than you do.

Maybe, just maybe, if both sides resolved to ditch these myths, we could all get along?

Well, at least until February…