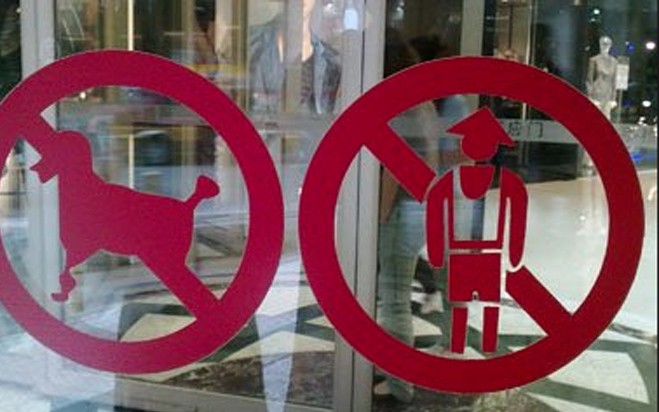 One such social problem is that there are too many Asian students in the city’s top high schools such as Brooklyn Tech.

You see, to a “Progressive” like De Blasio it isn’t “fair” that there are so few African-American, Latino, Native American, or partially blind left-handed transvestites “represented” in these elite schools.

How did this “problem” come about?

For the past several decades the schools have a different idea of fairness. All students who want to attend take an admission test, and whoever gets the best scores gets in.

In recent years, the majority of students scoring well come from Asian familes.

These tests have been in use for generations, and the schools have had stellar achievements for generations. Graduates from Brooklyn Tech have won five Nobel Prizes in Physics alone.

Mayor De Blasio is also going after charter schools, including ones that achieve outstanding results for poor minority children.

What is the problem with charter schools?

Another problem is that people who don’t pass the tests think they should be admitted anyways. These include “civil rights” organizations, who think their civil rights include getting into elite schools whether they qualify or not.

Finally, there are those people who equate achievement with privilege.

In times past, New York’s elite schools have been predominantly European-American, and later predominantly Jewish. And at all times there were ‘progressives’ complaining of the inherent unfairness of it all.

Today, there are twice as many Asians as whites in New York’s three top schools. Is that due to racism or something else?

Meanwhile, African-American and Hispanic students are rare and becoming rarer at the top schools. Is that due to racism or something else?

Many politicians express astonishment that the ethnic makeup of these schools is so different than the ethnicity of the community.

But such differences between groups are common around the world.

Before quotas were introduced in Malaysia, for every 4 engineering degrees earned by the Malay majority, the Chinese minority earned 400. When the first university opened in Romania, there were more German students in it than Romanian.

In neither case did the minority Chinese or Germans have any power whatsoever to discriminate against the ethnic majority.

And even in New York’s elite schools, there were more blacks enrolled in them as far back as 1938. Was there less racism in 1938?

So if racism is not the ‘social problem’ then what is?

For many years Progressives were fond of the idea that the tests are culturally biased. To some extent this is true, as all the tests are written in plain English.

But if the tests were re-written in say, Ebonics, the likely result would be a sudden surge in the number of Asian gangsta rappers.

Asian students are ‘over-represented’ in the elite schools because on average, they work harder than everyone else to earn the results to get in to them.

And what would happen if progressives like Mayor De Blasio enact racial quotas to fix this ‘social problem?’

The Asian students would study even harder for the limited spaces available to them. Their cultural expectations (that’s a fancy word for ‘parents’) would demand it.

The ‘social problem’ is cultural, not institutional. Some cultures value education more than others.

Test results are unlikely to change until these preferences change, and that is extremely unlikely.

The ‘social problem’ is not in the schools, it’s in the homes.

But the people who voted for Mayor De Blasio don’t want to hear that, much less do anything about it.