January 31st, 2016
Is Congress Irrelevant? And What the Heck is a Boehner? 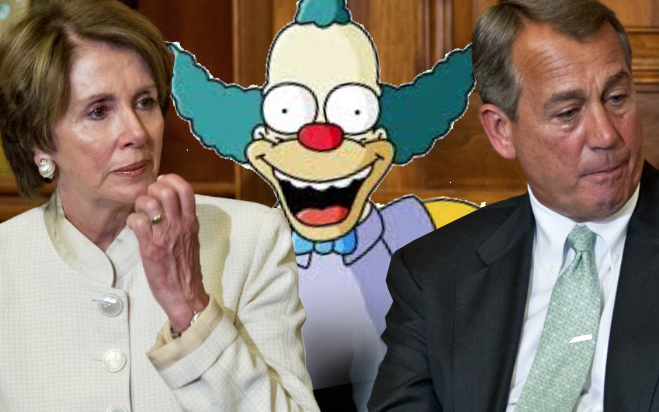 God’s truth, I do not know who Boehner and Pelosi are, or were, and now somebody or something called Ryan.

Yes, I know that they are in Congress, or were, but I do not know what posts they hold, or held, or in which party they are, or were, or in which house. I really do not.

How can this be? How can someone who has spent a lifetime in the fetid bubblings of the news racket, including many years in DC, be so profoundly ignorant of the most elementary of political facts? Isn’t that like a neurosurgeon who can’t find the brain?

It’s simple. Congress seems to me to be of so little importance as not to merit attention. I mean this seriously. I cannot see that it matters who is on what committee or speaker of whatever or, for that matter, who wins the presidential election (unless Trump) or who is on the Supreme Court. I think I can name two of the stiffs on the Court.

Consider: The crucial issues facing the country are the endless wars, racial hostility, immigration, affirmative action, federal surveillance, uncontrolled looting and burning, the deterioration of the universities, wildly excessive military spending, the abandonment of the Constitution, the conversion of the schools into indoctrination camps, the federal practice of torture, and the enforcement of political correctness by the federal government, academia, and the media.

What is the relevance of Congress to these?

Is it possible to imagine the alleged legislators (allegislators?) actually doing anything about any of them? If they were going to, they would have.

When is the last time Congress did anything that mattered?

For that matter, why does it matter who wins the presidential election? With the exception of Trump, none would even try to deal with the things that matter to me. They all promise More of the Same. All are politically correct. They all represent a self-interested clique of parasites.

The Supreme Court? The Nine Cadavers could have found torture unconstitutional, or affirmative action, or undeclared wars. Nothing. They serve only to certify the status quo. What do they do all day? Sleep in their coffins, I suppose, and come out at night to flap around the Capitol.

In high school, we learned that the government consisted of three branches, the Executive, Legislative, and Judicial. This was at least sometimes accurate, intermittently, a little.

The actual branches are more like the President, Israel, the corporations, Wall Street, the media, and the federal bureaucracies.

There is in this arrangement considerable overlap and much interlocking of directorates. Personnel go back and forth between Treasury and Wall Street, and corporate donors buy the President. Israel, the Pentagon, and the arms makers are as complexly tied together as copulating octopi. Or octopuses. (Or maybe octopodes.) All of them regard the United States as ticks regard cows.

In its beautiful design, democracy serves to keep the population from meddling in policy. If the politically correct want children to be taught that Sojourner Truth was more important than George Washington, a committee nobody has heard of in New York mandates the text book and the Department of Education requires its use by regulation.

No politician is responsible, and infuriated parents in Kansas have no recourse. How do you remonstrate with an anonymous bureaucracy? What is its phone number?

If the president wants to outlaw cultural symbolism—forbidding employees of the Veterans Administration to say “Merry Christmas,” for example—he just does it. (And did.) The Supreme Court, sloshing somnolently in its embalming fluid, will ignore the matter or affirm that the Constitution says whatever the President says. What earthly point is there in paying them attention? To do so establishes one as being in the last stages of naiveté.

Which, incidentally, is the attitude of citizenries of other Third World countries.

Along with Congress and the Supreme Dead and other such abandoned houses, I put Big Journalism. Encapsulated in a curious bubble of isolation, it serves chiefly to to produce a narcotic droning. The first rule of BJ—that’s “Big Journalism”—is to choose a point on the Left-Right continuum (it doesn’t matter what point) and never, ever deviate from it.

This rule, rigidly followed, makes unnecessary the reading of their output. They could be done in software. Name a subject and you know without further investigation the views of any given talking head. Why listen to them?

If anyone comes long who doesn’t fit, either news weasel or pol, they want to disappear him.Thus we see the Republicans, desperate to find a candidate that Hillary can beat, chattering at each other, “Is Trump Really a Conservative?” Not “Does what he says make sense?” The underlying question of course is “How can we get rid of this guy that the constituency wants but who isn’t a member of the tree house?”

They all seem to spend their time talking to each other about each other. They remind me of ingrown toe-nails. I think of this as the National Review Two-Step, though it is industry-wide. (Journalism is an industry: Ay, there’s the rub.) Thus the endless stories, “Leibniz on Atkins,” “Tugwurtle’s Response to Michael Moore on Coulter.”

When I go to political sites like, say, Breitbart.com, I find dozens of talking herds, almost none of who have I heard of. They seem fascinated with each other. None ever says anything that provokes thought.

They are like birds perched on their chosen points on the political x-axis, singing the song appropriate to that point. (Maybe you didn’t know that birds could perch on axes. Well, they can.) I suspect that they all live in a sealed cage in New York, connected to each other by wires. I am sick of their chirping.

If they have any notion of what is going on in the US, they conceal it well.

And my God, the narcissism. Any more self-esteem among the talking heads and they would need toe shoes. Reporters used to be honest drunks, ashen-souled, chain-smoking, profane, ugly, their cynicism a conclusion, not a pose, more concerned with getting the news than being the news. Ernie Pyle, Don Marquis, Mencken, Seymour Hersh.

Today “journalism” looks to be a branch of central casting in Hollywood. We have Michael Moore, who in his working-stiff costume seems to be trying out for a bit part in Rumble on the Docks, and Megyn Kelly, a babble-blonde BJ bimbo hoping for a gig with Victoria’s Secret.