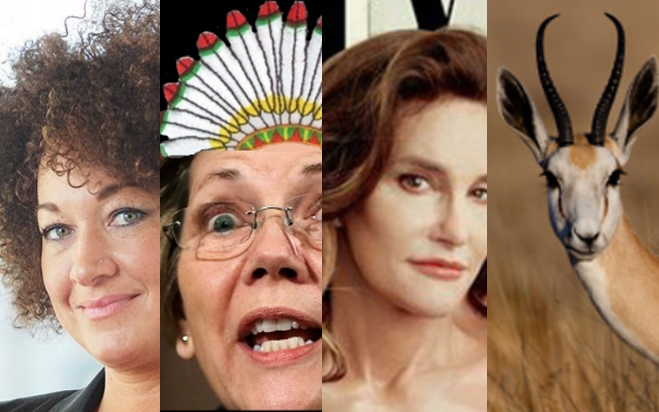 Rachel A. Dolezal, the recently resigned president of the Spokane, Washington, office of the NAACP, has come under a bit of controversy.

Both of her parents are white, but for eight years, Dolezal claimed that she was black. In addition to her role as president of an NAACP chapter, Dolezal was an instructor of Africana studies at Eastern Washington University.

Some critics claim that Rachel Dolezal’s actions were motivated by greed and narcissism. By becoming a black person, she could more easily become an NAACP leader, chair a police watchdog committee and get a teaching appointment.

Dolezal is not the only white woman who has benefited from racial fakery. Sen. Elizabeth Warren claimed that she was of Cherokee Indian ancestry.

That helped her land a job at diversity-hungry Harvard University as a professor of law. Not only was her great-grandfather not a Cherokee as she claimed but also he was a white man who boasted of shooting a Cherokee Indian.

Personally, I don’t hold either Dolezal or Warren at fault for racial fakery. If you read my autobiography, “Up From the Projects,” you will see that I had the occasion to fake my race.

It was 1960, during my troubled time in the U.S. Army, when I had just landed from a troop carrier in Incheon, South Korea. Upon disembarkation, soldiers were required to fill out a vital information form denoting one’s next of kin, religion, blood type and race, among other things.

Where it asked for race, I checked off “Caucasian.”

The chief warrant officer, in charge of inspecting the forms, told me that I had made an error by checking off “Caucasian.” I told him that I hadn’t and was in fact Caucasian.

After a couple of minutes or so of going back and forth, he asked me why I would put down “Caucasian.” I told him that if I put down “Negro” — what we called ourselves at that time — I’d be given the worst job. I never changed the form, but the officer probably did.

The bottom line is that modernity permits liberties previously unknown or unrecognized. Today we’re not held to reality.

An XXer can say that he’s a male. Or an XYer can say he’s a she. One’s sex is seen as optional.

Moreover, if a male claims to be a female, others are expected to acknowledge that.

For example, Bruce Jenner, Olympic decathlon champion and reality show personality, has recently become Caitlyn Jenner. People now are required to address him as her.

I’ve been giving this option some serious thought. I’ve been thinking of calling myself a springbok trapped in a human body.

Some people might argue that I would be in need of psychological treatment. I’d dismiss such a claim as being animalphobic.

You might ask, “Williams, why in the world would you want to call yourself a springbok?”

I would be doing it for personal gain, just as Rachel Dolezal and Elizabeth Warren benefited by pretending they were of another race.

I’d be doing it for tax reasons. I’ve read a considerable amount of the Internal Revenue Code. It says nothing about wild animals having a federal tax obligation.

Were government officials to demand that I, as a springbok, pay taxes, I’d report them to the Society for the Prevention of Cruelty to Animals.