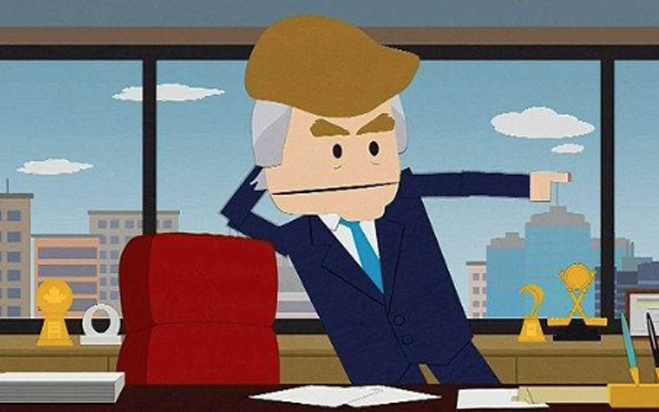 What is it that puzzles New York about Trump’s enormous appeal?

He does what so many of us desperately want. He takes no guff from the loathsome talking heads who have never baited a hook or worried about a mortgage payment or been bankrupted by the confluence of Wall Street and Pennsylvania Avenue.

He doesn’t whimper and wriggle and apologize like a puppy who has wet the rug after saying something that upsets the priss spigots.

He says, perhaps in different words, what so many want to say. “Stick it where the sun don’t shine.”

The Beltway bastards just don’t know what to do about it. They try all the political-correctness sure-fires—“You are racist! Sexist! Insensitive! Islamophobic!”–and he doesn’t respond correctly.

No. He says, “Up yours, Potato Chip. I made ten billion dollars. What have you ever done?”

It’s love at first sight. So many people are sick of disintegrating bottle-blonde wreckage and proliferating vegetation—we have enough Bushes for a goddam arboretum—and all the inbred scum of a dying country.

How much of what he says is true, and what could he as President actually deliver? He chiefly wants to deport illegal aliens. Fine–but can he? Does he really plan to?

I note that he is carefully, and dishonestly, putting the immigrational blame on those who came instead of on the Americans who bade them come, wanted them to come, and want them to keep coming.

Does a Mexican take an American’s job by putting a pistol to his head and saying, “Geeve me the shoffel or I weel blow your brines out”?

I will believe that Trump is serious about deporting illegals when he proposes to slap on employers a fine of $500 per day, per illegal, half to go anonymously to the informant if any, this to go into effect after a month’s grace period.

It presumably could be packaged as enforcement of existing law, and therefore not require congressional approval. It would place the burden of verification squarely where it belongs, on the American businessmen who know well that they are hiring illegals.

The trouble with this approach is that it would work. Immediately. Slaughterhouses, farms, orchards, and construction firms would go tits-up.

An explicit question that needs an explicit answer: Who is going to replace the illegals? Answer: No one. A guest-worker program would do the trick but the workers would still be Hispanics. No?

Blacks are not going to do the scut-work. They could have had the jobs long ago if they had wanted them. But welfare and leisure in Detroit appeal more than backbreaking labor under a hot sun in a tobacco field. Few whites will even consider standing ankle-deep in blood in an abattoir. Which leaves….

I think we will see Donald duck the question.

Trump is also says that “Mexico” is “sending” its criminals north, and that Hispanics are raping and robbing and killing great swaths across America. In this he is supported by much dreary howling from Ann Coulter, the Manhattan Wind Tunnel.

But is it so? How exactly does “Mexico” “send” its criminals to the US? Offer free bus tickets to the border to anyone who can prove he is a criminal? Package them for shipment by UPS? Mexico isn’t sending them. They are going where the pickings are good. America’s insatiable appetite for drugs provides very good pickings.

The claim that Hispanics in general are causing a wave of crime is shaky though politically saleable.

Mexicans are certainly neck-deep in the drug trade, satisfying American demand extending from cocaine on Capitol Hill to a little of everything for high-school and university students to marijuhweenie for middle-class folk who like to toke-up to scag for derelicts nodding off on street corners. But otherwise?

On Jared Taylor’s American Renaissance site I find figures from DOJ showing that Hispanics are all of 26% more likely than whites to commit violent crime.

Since Jared is strongly against massive immigration (as am I) he is unlikely to be cooking the figures in favor of Hispanics. (For the intellectually adult, Ron Unz, long but well worth reading.)

Oddly, Trump does not mention crime by blacks, which genuinely is a disaster. Why? You don’t suppose this is electioneering…?

Odd, though, since (I will bet that) his partisans are also sick of black crime, burning cities, trashed malls, the Knockout Game, as well as political correctness, compulsory concern for sexual freaks, federal meddling, the drugging of little boys, and so on. I am one of them.

It is also amusing that those against immigration growl about Hispanics’ being on welfare. This, like the whole problem of immigration, is self-inflicted. If you don’t want people to go on welfare, don’t offer them welfare. How hard is this? We would all freeload if we could. If the government offered you a grand a month, legally, for free, would you take it? I would. It seems a bit wrong-headed to offer Hispanics free stuff and then growl when they accept.

Ah, but here we come to the matter of hidden agendas. American businessmen oppose amnesty because they want the illegals to remain illegal so they can’t organize and demand better pay. But the same businessmen do not want them deported. And of course welfare for immigrants is a subsidy to American businessmen: If the government pays Pedro half of a living wage, then Wal-Mart has to pay him only the other half.

Many, methinks, of Trumps proposals make more electoral than practical sense. A fence along the frontier? It would require congressional approval, many years, and probably would not work. A twelve-foot fence requires a thirteen-foot ladder. It is rousing good fun to talk about the Israelis and they have a fence and it works. But they have a short fence and they are willing to shoot to kill anyone crossing it.

Cutting off federal funds to “sanctuary” cities, proposed by Trump, presumably would require approval from Congress, where it woud be blocked by Democrats, American businessmen, mayors of “sanctuary” cities, the talking heads, and related trash. California, with more Hispanics than whites, a state in which police are currently forbidden to check immigration status, would be unlikely to cooperate. Then what? Send federal troops to occupy California?

It is so very simple: If you hire them, they will come. If you don’t, they won’t. The problem in seven words, the solution in five.

Presidency-wise, though, the choices are two: Trump, or more of the same.

The same nauseating, corrupt inside-the-beltway pols, bought and paid for by corporate interests, mendacious, contemptuous of the rest of America, politically correct, guaranteed to preside over the continuing deterioration.

Maybe I have overestimated the number of choices.