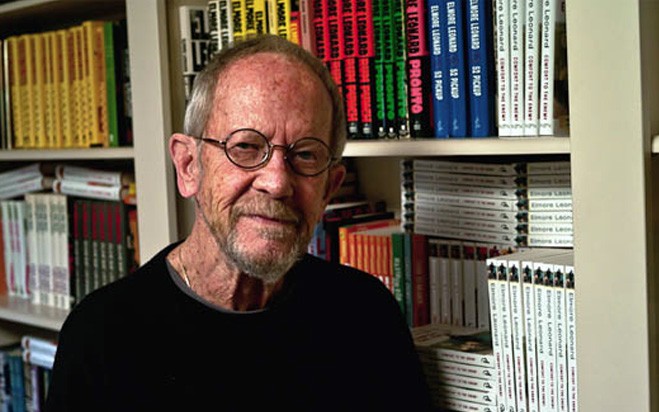 The Dickens of Detroit passed away yesterday.

Perhaps the greatest writer of dialogue, even if you had never read one of his books, chances are high that you’d seen a movie created from one of them.

Who else can match it?

But as is so often the case, the books are better than the movies. The saying may have been invented for Elmore who has more than 40 movies inspired by his writing.

I used to hate reading fiction, because well, it all seemed so “made up.” But when Elmore writes, he is invisible, and the characters tell the story as they live it, bringing the reader along for a sometimes incredible ride…

Every movie needs a bad guy, and Roland Crowe in Gold Coast is a doozie. Part sadist, part comedian, and all redneck, he sets out to enforce the will of his now dead employer that his widow never date another man…

Except maybe Roland of course.

The Quentin Tarantino movie Jackie Brown, was based on this novel.

When a flight attendant is caught smuggling drugs and coerced to helping the police entrap her scumbag partner, she turns the tables on them all by enlisting the help of her bail bonds man. It all comes down to a shopping mall switcharoo…

This western was a Burt Lancaster movie in 1971.

Tricked into killing an innocent man, Bob Valdez wants the man who set him up to pay the widow for the wrongful death. But he laughed at Valdez and had him beaten him until he had no choice but to make things right on his own.

And woe be to anyone who gets in his way.

One of Elmore’s best heroes, US Marshall Raylan Givens, who is now the star of the TV Series: Justified, made his debut in this book.

Using cowboy wisdom and a little help from a sexy psychic, Raylan outsmarts a couple of con men who are holding a mob bookie hostage in a Miami mansion.

When a suburban real estate agent and her ironworker husband accidentally witness a mob killing, they are put next on the hit list, by an Indian hit man called “The Crow,” and his wanna be partner.

The cops can’t help them in the middle of nowhere, so ultimately its going to come down to one wife, one husband, and one lethal shot.

But I’ve only read about half of Leonard’s 45 novels, so maybe there are some gems I’ve yet to discover. Let me know your favorite…