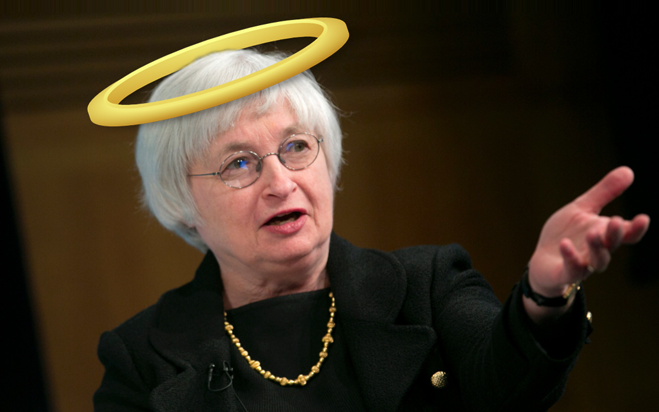 Arguably the most powerful woman in the world, Federal Reserve Chairwoman Janet Yellen, complained of rising income inequality in a recent speech.

In an attempt to make the Fed more likeable, Yellen is simply expressing the popular rage. She will find applause amongst occupiers, liberals, and other people who have no idea what the “Fed” is or what it does.

Ms Yellen falls into the latter category, even though she is its chairperson.

After all, has the Fed done anything that might increase inequality?

The Fed handed out $700 billion dollars to big banks and companies in the 2008 bailout. That’s billion with a B.

Some of the biggest companies run by the richest people: Goldman Sachs, JP Morgan, GM, Wells Fargo, etc. they all took it. Not exactly a plan to flatten inequality.

Handing out all the free money didn’t seem to have the effect that the Fed wanted, so they started lowering interest rates. Down, down, down, close to zero, supposedly to stimulate ‘the economy.’

As far as the Fed is concerned, ‘the economy’ is a list of numbers they keep on a spreadsheet. But low interest rates punish people on fixed incomes in the real world. A senior citizen who had been getting 3 or 4% from T-Bills gets almost nothing now.

Moving people with low income to no income is not a step towards equality.

The stock market was in the toilet back in 2008, so to ‘stimulate’ it the Fed started buying $80 billion – billion with a B – worth of treasury bills each and every month.

Now what does that have to do with the stock market you say? Here’s what. The Fed bought those treasury bills from the primary dealers – aka, big banks like Goldman Sachs, JP Morgan, etc – and then the big banks have to do ‘something’ with that cash, so they plowed it into the stock market.

This did two things. First, it boosted stock prices like crazy. Secondly, it transferred a large degree of ownership of big business – aka wealth – to the already wealthy.

And Ms. Yellen has been the most enthusiastic promoter of these bond purchases. Not exactly a formula for combatting wealth inequality is it?

Perhaps even more alarming that Ms. Yellen’s ineptitude, is that the Federal Reserve is literally owned by the big banks.

They have been giving money to themselves.

Yet people who would complain about trickle-down economics are completely oblivious to the absolute gusher of money being showered on the top 1% by Fed policies.

All this money printing is of course inflation – though very little of this inflation has been seen at the retail level where most of us live.

Where it has been seen is in goosing the stock market (90% owned by the wealthy) and in re-inflating housing prices to the benefit of more homeowners, and the detriment of homebuyers.

But the Chair of the Fed can’t see what she is doing. She so firmly believes she is doing the right thing that she is immune to evidence to the contrary.

Blinded by the light of her imaginary halo.

And yet when Ms. Yellen said: “The extent of and continuing increase in inequality in the United States greatly concern me.”

She got a nice round of applause.