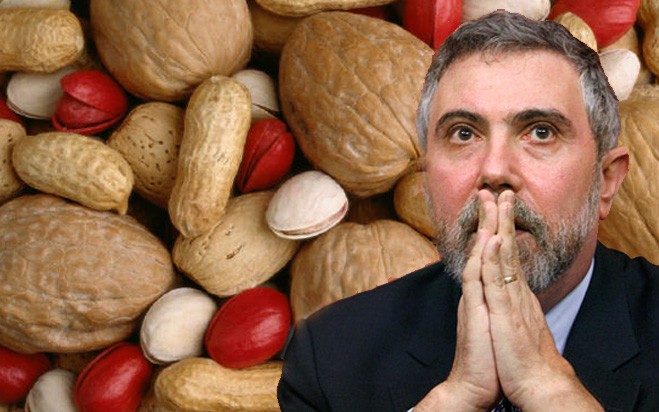 We’ve lost track of all the nutty statements made by Paul Krugman.

Besides being a columnist for the New York Times, and a Nobel Prize winner, Krugman is also a fantastic writer.

This combination is quite dangerous, as it gives him the audience, the reputation, and the ability to spread nutty ideas far and wide.

Perhaps most famously, he once advised that to boost the economy, we should hope for an invasion by space aliens.

His latest ‘advice,’ is only slightly less ridiculous.

In a column titled, “The Harm Germany Does,” Krugman blames the economic problems of the world on Germany’s account surplus.

Their account surplus is a result of selling more goods abroad – from companies like BMW, Bayer, and Braun – than they import. The German people also have a culture based on responsibility and saving for the future.

But according to Krugman: “In this environment, a country that runs a trade surplus is … beggaring its neighbors. It is diverting spending away from their goods and services to its own, and thereby taking away jobs.”

Krugman has a point, but it only exists on the peak of an ivory tower.

For what is Germany supposed to buy from Greece? or Spain?

All those countries make is promises they can’t keep. To their citizens, to their creditors, to everyone.

Yet according to Krugman, being productive and responsible is like stealing food from less-competent and less-successful neighbors.

By this standard, America was a rotten global citizen for most of the 20th century, when it ran trade surpluses for 70+ years.

For decades, the United States was the mightiest manufacturing power the world had ever seen.

Every nation that has risen to world power has done so through economic nationalism:

Trade surpluses, run at the expense of rival powers, have long been the symbol of great nations rising.

Though Germany has only a quarter the population of the United States, it makes some of the finest products on earth, and sells one-third of all it produces to other countries.

In the midst of a worldwide recession, Germany’s unemployment rate is only 5 percent.

Is that not a record to be admired?

Not according to Paul Krugman.

He wants the Germans to shake off their habit of working and saving and start spending and borrowing their way to “prosperity.”

But German Chancellor Angela Merkel is not buying it.

And having just been re-elected in a landslide why should she? Apparently, she believes that a national leader’s job is to do what is best for her nation.

The Chinese don’t buy it either.

And how has America’s conversion to globalism, since George H.W. Bush proclaimed the coming of the New World Order, worked out?

Thus, during 25 years of free-trade globalism, the United States has run up well over ten thousand-billion, dollars in trade deficits.

What does it have to show for it?

Economic independence is history. The USA relies on foreigners for the necessities of life.

It is the greatest debtor nation in history. Beijing and Tokyo earn billions in annual interest payments on it’s Treasury bonds.

And as Shanghai rises, Detroit crumbles.

In the first decade of this century, the USA lost 6 million manufacturing jobs as 55,000 factories disappeared.

Why would Germany or China want to emulate failed policies that led to the decline of the greatest republic in the history of mankind?

If there is any trade deficit America should pursue, it should be to trade Paul Krugman somewhere else.

Maybe Zimbabwe would take him in exchange for a bag of nuts?