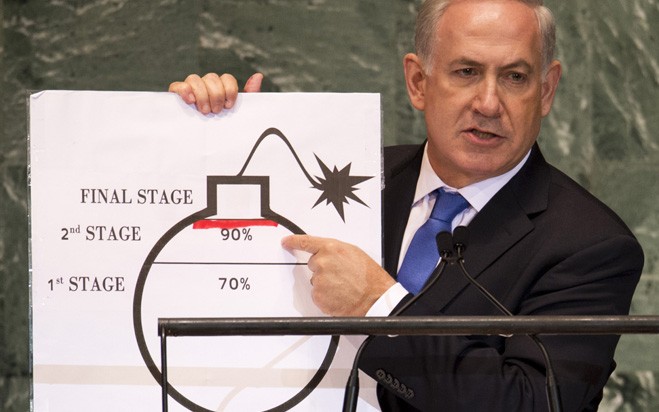 There was a bit of a hullabaloo over the deal made last week to lift sanctions on Iran, in exchange for reductions in their nuclear program.

Many praise the diplomacy as progress towards a more peaceful and stable Middle East. Russia, China, Egypt, Turkey, France, Britain, Germany, are all fine with it.

But others are outraged.

Neo-con William Kristol, compared the deal with Chamberlain’s appeasement of Hitler in Munich.

The comparison is a bit of a stretch, as before the Munich deal in 1938, Germany had:

What has Iran done?

They built a power plant.

It’s not the same thing. Not. Even. Close.

Now of course it’s not just any power plant. It’s a nuclear power plant that requires low-grade uranium to operate. And it is ‘possible’ to further enrich that uranium into weapon’s grade material.

Some people are quite upset about that possibility. Perhaps no one more so than Israel’s Prime Minister Benjamin “Bibi” Netanyahu, who said:

That may be even more of a stretch than Kristol’s comparisons to Munich.

In this deal, Iran has agreed to:

Does any of that make the world “a much more dangerous place”?

Consider Netanyahu’s worst-case scenario — that Iran is cleverly scheming to get sanctions lifted, and, then, she will make a ‘mad dash’ for the bomb.

But if Iran wanted to make a ‘mad dash’ for a bomb, why would it allow more inspections?

Iran has had the ability to make a bomb for years, decades, and yet, she has not built one.

If Iran tried to further enrich its uranium, it would take months to do and with this new deal, the U.S. would know about it within hours.

Even supposing that Iran were somehow able to get a nuclear bomb despite the hurdles it has put in its own way, then what?

It would be egg on the face for Kerry and Obama and they would be forced to act. At the very least Iran would be put under more severe sanctions, if not outright military intervention.

And if in an act of insanity, Iran found a way to deliver a nuclear bomb to the U.S. or Israel, it would be bombed back to the Stone Age within weeks.

But there is no indication that Iran has any such intention, so lets consider a different scenario: that the Iranians are not crazed lunatics but simply looking out for what is best for their country.

If Iran has no atom bomb program, as its Ayatollah attests, as its President is willing to demonstrate, and as 16 U.S. intelligence agencies concluded six years ago and again two years ago, consider the future that might open to Iran.

An end to isolation and a return to the global economy, a return of Western investment, producing jobs and prosperity, and the emergence of Iran as the dominant power in the Gulf region.

Why would an Iran, eschew that opportunity, to risk war with the United States that would assure the country’s annihilation?

Iran does not want war.

Although it has been invaded repeatedly, Iran has not attacked another country for over 500 years. And Iran’s actions seem to indicate that building a bomb is not, as some insist, their goal.

America does not want war with Iran, and neither does Israel.

What good could come from it? A few might profit from the plunder, perhaps the same few who are so eager to start another war.

But the citizens of the world are growing weary of that game, as the very vocal opposition to involvement in Syria showed, reckless military adventures are not going to play well with the voters.

Besides, Netanyahu has been warning that Iran has been ‘close’ to getting a nuclear weapon since 1992 – for over 20 years.

Making people afraid and then proposing to keep them safe has long been an effective tactic for coming to power, and it appears that Netanyahu is simply blowing smoke.