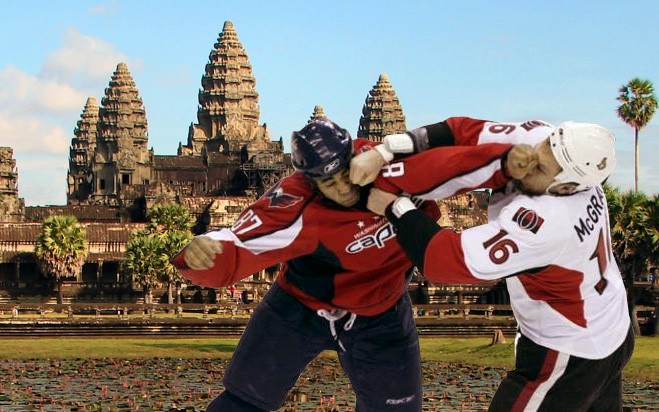 I didn’t plan to get in a fight.

I didn’t go looking for trouble either, but somehow trouble seems to find me. Well, that’s not exactly true, maybe I was looking for it just a little bit.

Here’s how it happened…

The sun was blazing on the third day of my tour of Angkor Wat. Even my driver commented on how hot it is, and if a Cambodian says it’s hot, then trust me, it is hot.

We set off to see the more out of the way temples. Sometimes, I have them all to myself, at least for several minutes – and it’s very peaceful. 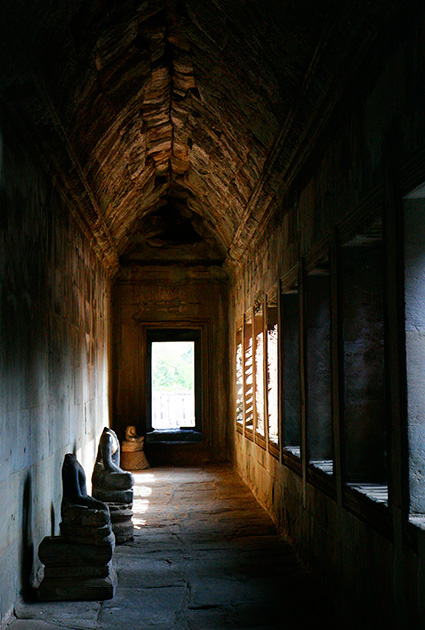 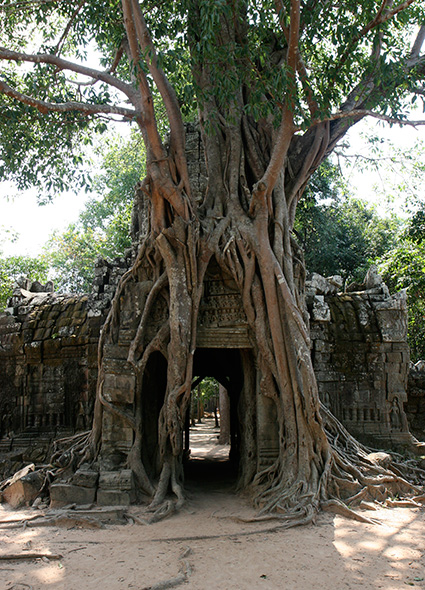 The destruction is almost as amazing as the places themselves. Some of the damage is hundreds of years old, from ancient wars fought from the backs of elephants – others more recent – bullet holes from the Pol Pot regime.

Even though the temperature is sweltering, the pathways to these secondary temples are nearly always shaded, giving shelter from the sun, but not from the onslaught of children selling souvenirs and sodas at each stop.

They have been waiting all day for a tourist to show up, and they are very enthusiastic salespeople.

They ask where I’m from, then recite the capital city of my country. They are always right.

I try mixing it up, and tell one kid I’m from: Norway, Argentina, Australia, Egypt, Cuba, but without a pause he names them all.

I consider naming some African countries, but I don’t know their capitals either, and that doesn’t seem fair. I finally stump him with Mongolia.

As a consolation prize, I tell him I’m actually from Canada, and that I’ll buy something from him if he can name the city I was born in.

Boom, just like that he reels off ten Canadian cities including mine. The kid gets an A in geography and I get a souvenir t-shirt. 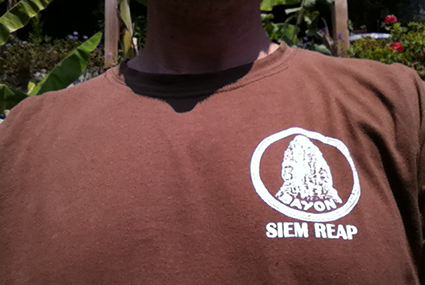 Head back to the main temple for the sunset and the sky does not look like it is going to cooperate. It’s a half hour walk from the front gate to the central tower, so I start walking just in case.

Unlike the more remote locations I’ve been at all day, the main temple is crawling with tourists. It’s a little difficult to be struck with awe when you’re just another ant on the hill. 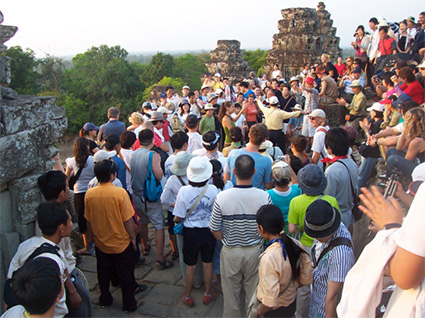 Finally at the central spire, the stairs up are more like a ladder, each step only a few inches wide. Perhaps it will be less crowded up there.

It’s almost like climbing a mountain going up, but I claw my way, up, up, up about fifty feet from the stone middle platform. There’s a spectacular view from the top, and also a frightening one down.

Have you ever climbed a ladder onto the roof of a house, and then turned around and wondered how you were going to get down?

Could you even see the ladder?

This is exactly the same feeling you get looking down from the top of Angkor Wat, but with a couple important differences: 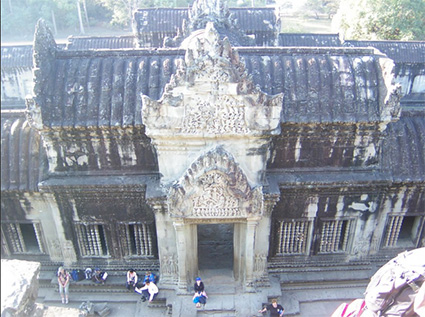 Those people sitting down there seemed so cruel to me. Like they were just waiting to watch me fall. But still I wondered…

How the hell am I’m going to get down from here?

Walking down like a normal set of stairs is out of the question, no more than you would walk off your roof onto a ladder. I could lay on my stomach and swing my legs over the edge to feel for a step.

Maybe it’s easy once you get started? Or maybe it isn’t?

The price of being wrong seems too high. And besides, that is not going to look cool at all. But am I willing to die for my pride?

It should be a simple question, but all of a sudden its not. I start to wonder about the tales of human sacrifices on the tops of temples in ancient times.

Then I notice a very long line towards the other side of the top platform. It turns out that they have installed a metal guide rail to hold onto there – and every sane person is lined up to use it. 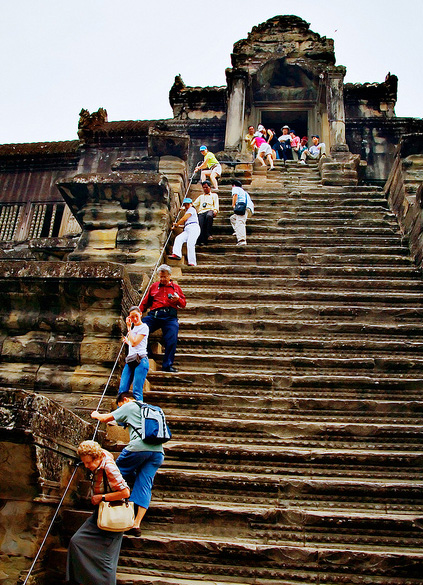 Though I’m more of a risk-taker than average – I line up too – I’d rather wait than become a human sacrifice.

The line moves just as slowly as the elderly Japanese ladies who somehow managed to climb up here, will allow themselves to go down. It only took me a minute to climb up, but after half an hour I’m still waiting.

A middle aged white guy who might have been a rugby player decades ago, approaches the line. He starts making conversation with the guy behind me, and it’s plain what he’s up to, he’s going to try to cut in.

I can see people watching him, and I can also see that they’re not going to do a damn thing about it.

He makes his move and says to the guy behind me, “Do you mind?”

The people who are getting cut off have to be annoyed, but they don’t show it.

I think it was Burke who wrote:

“All that is necessary for the triumph of evil is that good men do nothing.”

Looking back, that’s all I see, a whole lot of nothing. They’re just going to sit there and take it.

I’m also annoyed, because whether he knows it or not, he’s making me look bad too.

Here we are in a country that has been abused by foreign powers for centuries, right at the middle of an ancient and once powerful culture, right on the pinnacle of its most sacred temple and this guy – this white guy – is strutting around like he owns the place.

He looks at me like I must be kidding.

The Asian tourists standing in line look at me too, either in astonishment that I’m taking this stand for no gain of my own, or that I’m making a faux pas by breaking the social harmony.

I’m not sure which – maybe both.

I point over their heads and say, “The line starts over there. We all waited, you can too.”

Line-cutter gives me a bunch of smooth talking crap, trying to be my new friend, and I suppose I could go for it easy enough. What the hell do I care? He’s not even cutting in front of me.

His face brightens up and he says, “England, why?”

“I’m taking a poll to see where the rudest people come from. England just took the lead.”

He mumbles something and shuffles a bit further back the line. I know damn well he doesn’t go to the back, but my point has been made – at least to myself – if no one else.

The line shuffles a bit forward, and I hear Line-cutter shouting, “Well, a Yank cut in front of us at the airport.”

I’m beginning to regret opening my damn mouth, but since he wants to keep going, I reply, “And how did you like it?”

“Well, now you know how popular you are around here.”

I can understand that he wants to save face, but I wish he’d just keep his pie-hole shut. My wish is not granted.

He shouts again, “Well, at least we never bombed these people.”

It’s low blow—as if any individual American is responsible for the excesses of the Vietnam War. But he’s also quite mistaken in another way, because I am not an American.

“Sir, I’m Canadian and we never bombed anyone, so there is going to be no moral high ground for you today. You are in the wrong sir, and no amount of debating will change that.”

There are no more comments from Line-cutter, thank goodness. I just hope I can get off this temple without getting pushed off.

The guy behind me asks if I’m really from Canada. He’s surprised at my behavior, because he thought Canadians were always polite and mild mannered.

I say, “Yes usually that’s true. But if someone else isn’t polite, then the gloves come off. What do you think all those hockey fights are about?”