November 8th, 2016
The Other Side Absolutely Must Not Win 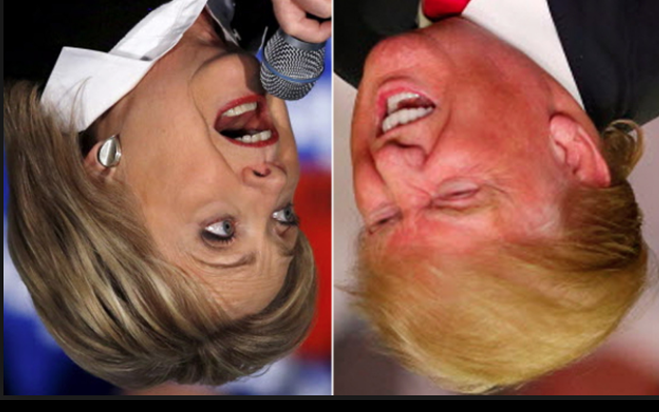 The past several weeks have made one thing crystal-clear: Our country faces unmitigated disaster if the Other Side wins.

No reasonably intelligent person can deny this. All you have to do is look at the way the Other Side has been running its campaign.

Instead of focusing on the big issues that are important to the American People, it has fired a relentlessly negative barrage of distortions, misrepresentations, and flat-out lies.

Just look at the Other Side’s latest commercial, which take a perfectly reasonable statement by the candidate for My Side completely out of context to make it seem as if he is saying something nefarious.

This just shows you how desperate the Other Side is and how willing it is to mislead the American People.

The Other Side also has been hammering away at My Side to release certain documents that have nothing to do with anything, and making all sorts of outrageous accusations about what might be in them.

Meanwhile, the Other Side has stonewalled perfectly reasonable requests to release its own documents that would expose some very embarrassing details if anybody ever found out what was in them. This just shows you what a bunch of hypocrites they are.

Naturally, the media won’t report any of this. Major newspapers and cable networks jump all over anything they think will make My Side look bad. Yet they completely ignore critically important and incredibly relevant information that would be devastating to the Other Side if it could ever be verified.

I will admit the candidates for My Side do make occasional blunders. These usually happen at the end of exhausting 19-hour days and are perfectly understandable.

Our leaders are only human, after all.

Nevertheless, the Other Side inevitably makes a big fat deal out of these trivial gaffes, while completely ignoring its own candidates’ incredibly thoughtless and stupid remarks – remarks that reveal the Other Side’s true nature, which is genuinely frightening.

My Side has produced a visionary program that will get the economy moving, put the American People back to work, strengthen national security, return fiscal integrity to Washington, and restore our standing in the international community.

What does the Other Side have to offer?

Nothing but the same old disproven, discredited policies that got us into our current mess in the first place.

Don’t take my word for it, though. I recently read about an analysis by an independent, nonpartisan organization that supports My Side. It proves beyond the shadow of a doubt that everything I have been saying about the Other Side was true all along.

Of course, the Other Side refuses to acknowledge any of this. It is too busy cranking out so-called studies by so-called experts who are actually nothing but partisan hacks.

This just shows you that the Other Side lives in its own little echo chamber and refuses to listen to anyone who has not already drunk its Kool-Aid.

Let’s face it: The Other Side is held hostage by a radical, failed ideology. I have been doing some research on the Internet, and I have learned this ideology was developed by a very obscure but nonetheless profoundly influential writer with a strange-sounding name who enjoyed brief celebrity several decades ago. If you look carefully, you can trace nearly all the Other Side’s policies for the past half-century back to the writings of this one person.

To be sure, the Other Side also has been influenced by its powerful supporters. These include a reclusive billionaire who has funded a number of organizations far outside the political mainstream; several politicians who have said outrageous things over the years; and an alarmingly large number of completely clueless ordinary Americans who are being used as tools and don’t even know it.

These people are really pathetic, too. The other day I saw a YouTube video in which My Side sent an investigator and a cameraman to a rally being held by the Other Side, where the investigator proceeded to ask some real zingers.

First off, the people at the rally wore T-shirts with all kinds of lame messages that they actually thought were really clever. Plus, many of the people who were interviewed were overweight, sweaty, flushed, and generally not very attractive.

But what was really funny was how stupid they were. There is no way anyone could watch that video and not come away convinced the people on My Side are smarter, and that My Side is therefore right about everything.

Besides, it’s clear that the people on the Other Side are driven by mindless anger – unlike My Side, which is filled with passionate idealism and righteous indignation.

That indignation, I hasten to add, is entirely justified.

I have read several articles in publications that support My Side that expose what a truly dangerous group the Other Side is, and how thoroughly committed it is to imposing its radical, failed agenda on the rest of us.

That is why I believe 2016 is, without a doubt, the defining election of our lifetime. The difference between My Side and the Other Side could not be greater. That is why it absolutely must win on November 8.