November 23rd, 2015
Showdown in San Ramon: A Clash of Civilizations 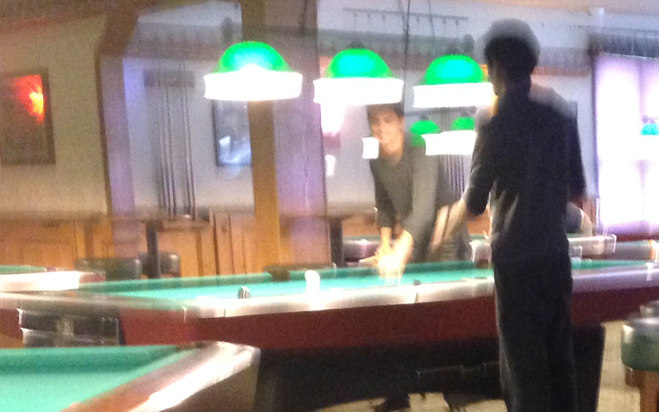 So I’m at Crown Billiards in San Ramon for my Sunday practice session. The jukebox is blaring Country & Western music as usual. Not my preference, but it’s not up to me, that’s what they play at Crown.

A couple young guys take the table next to me and start playing pool. Whatever. After a few minutes, while I’m down on a shot, I hear a weird sound. One of their phones is ringing and his ringtone is some kind of Foreign Techno Music.

He doesn’t answer it.

Oh wait. It’s not a ring tone. He has actually fired up his iTunes and is cranking Techno music, while some cowboy is going on about his truck in the background. The combination is horrendous.

Now seriously, what kind of an asshole plays his own music in a venue that is already playing music? I mean, if I go to a nightclub, I don’t bring a boombox with me. If I go to a concert, I don’t bring an electric guitar with me.

I stand looking at them in disbelief, and notice people at other tables also making sideways glances. Wondering no doubt: What’s the deal with these guys? Well, what is it?

Are they just young and ignorant? Are they really truly unaware how annoying they are? Or are they purposefully being annoying?

Oh, I forgot to mention that before the concert began I overheard them speaking Arabic, and the Techno music is overlaid with what sounds like a Muslim call to prayer.

Based on my experience in the Middle East, I’m not entirely surprised by their behavior. Consideration for others is not highly valued there. It’s not a part of their culture.

But we are not in the Middle East now.

And isn’t it just common sense that when you go to a foreign country that it’s best to adapt to the cultural norms of that place. You know, when in San Ramon do as the San Ramons do?

What we consider common sense or common courtesy is in other parts of the world considered common stupidity or common weakness.

So what we have here, as one Presidential candidate recently put it, is a ‘clash of civilizations.’

Now given that the tragedy in Paris is only a few days gone by, and there is just a wee bit of wariness towards Arabs at the moment, and that we are in a pool hall filled with rednecks holding sticks of wood, one might think that a bit of discretion on these young fellows part would be well-advised.

But are they just a couple of numbskulls or is this some sort of musical terror attack?

While I ponder this question, one thing has become abundantly clear: although everyone within earshot is annoyed, no one is going to do a damn thing about it.

Why not? Fear? Tolerance? Compassion? Love?

Whatever the reason, it’s a stupid one, not only is everyone else annoyed, but whether they know it or not these young men are creating animosity towards themselves, and the longer this goes on the greater it will become. If they are not made aware that what they are doing is a problem, then it will continue, not only here but everywhere. And eventually something bad will happen, perhaps tragic.

On the other hand, perhaps it’s intentional. Perhaps they are enjoying annoying everyone and laughing at the fact that these Western girly men are so weak, at how easy it will be to conquer Western culture with it’s naïve tolerance and kindness.

I doubt it. But perhaps.

In either case, someone needs to do something.

I go up to the bar and ask the bartender if they have a policy for this sort of thing. She says, “No policy,” but that she’ll talk to them if I want. I’m pretty sure she would, but there is no way I’m sending a girl in my place. No way. I say, “I’ll take care of it.”

Why do I always have to be Clint Eastwood?

I walk back and one of the Arabs is over by my table plugging his cell phone into the outlet there. I put my cue across the two tables so there is no way past. I have his full attention, motion to the other phone and ask, “Is that your music over there?”

He looks at me.

I am speaking softly, but I am also quite literally carrying a big stick. He seems to get the message, so I move the cue aside to let him pass. The message is relayed, and the music is turned off.

Some cultural information has been passed along and everyone is the better for it. Not only the patrons who only have to get a headache from one jukebox, but also the young Arab guys, who’ll be spared a little scorn here, and perhaps a lot worse elsewhere.

There are no hard feelings that I can detect. They go back to playing pool, so do I, and Crown Billiards goes back to what it is: A redneck pool hall in San Ramon. It isn’t much, but it is what it is.

Perhaps in five or fifteen years it will be converted into an Arab discotecque, but not today, not today…