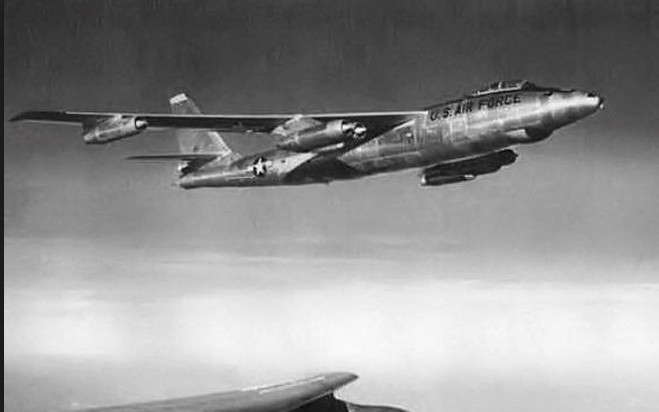 On the night of July 17, 1957, a UFO stalked a US Air Force RB-47 electronic reconnaissance plane for one and a half hours over an 800-mile course from the Mississippi Gulf Coast to Oklahoma.

The RB-47 tried to catch the UFO twice, but it was outrun or outmaneuvered both times. The UFO was seen by the crew, detected by the RB-47’s sensors, and tracked by a ground radar station that painted the RB-47 and the UFO at the same time.

The UFO appeared first as an invisible radar source that was tracked by the RB-47’s airborne radar receivers. The invisible source appeared to follow and then circle the RB-47 as it flew over           Gulfport, Mississippi.

As the aircraft flew further inland, the radar source suddenly appeared to the crew as a “very intense white light with [a] light blue tint” that flashed across the airplane’s flight path and took up a position to the right side of the aircraft before it blinked out. 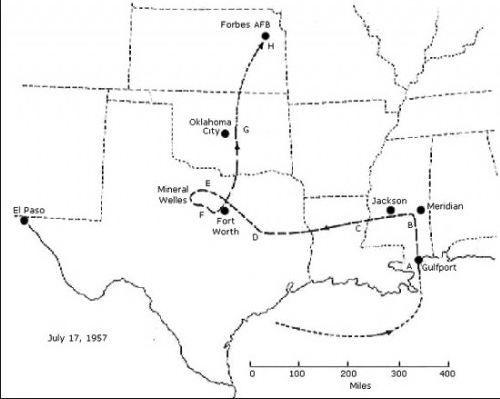 The radar-emitting source moved with the light, and even after the light blinked out, the radar source never disap- peared from the RB-47’s radar receivers. The “huge light” then reappeared at the same bearing as the radar source and below the RB-47.

The RB-47 captain asked for and got permission from air traffic control to deviate from his flight plan and chase the radar-emitting light.

He went to full power and dived, but as the RB-47 gained the object suddenly stopped in mid-air below him and the RB-47 overshot it. He turned back toward the object, but when the RB-47 got within five nautical miles the UFO dropped lower and both the RB-47 and the ground radar station lost contact with it.

Running low on fuel because of the extended high-speed chase, the captain radioed the ground station that he had to set a course for home (Topeka, Kansas), at which point the object then took up station behind the RB-47 and was again recorded on the airplane’s radar receivers until the RB-47 had passed Oklahoma City on its way home, when the radar signal finally faded out.

This case has an official pedigree because it was assembled from flight plans, mission reports, and communications transcripts that were retained as military records. 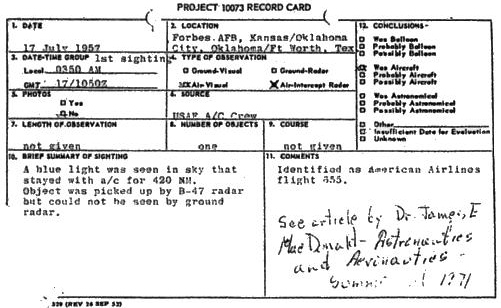 There can be no doubt about witness reliability because the six aircraft crew members plus the ground-based radar tracking and flight control reporters were all either military personnel or government employees whose careers depended, at the very least, on bureaucratic punctiliousness.

About ten years after the Kenneth Arnold index case there is reliable evidence that a fast, maneuverable object seen visually and reported on radar stalked and outmaneuvered a frontline US military aircraft.

The malfeasance or misperception explanation cannot           explain this case. Three alternative explanations are that the visual and radar observations were: a previously unknown atmospheric meteorological event, a secret military craft not known to the airmen and radar operators, or an extraterrestrial vehicle.

The atmospheric-meteorological explanation is weakened by the fact that no one knows how the atmosphere and the weather could produce such an effect.

The secret military explanation is weakened by two arguments: first, it wasn’t “secret” if it was playing tag with a frontline military aircraft where it could both be seen and tracked on radar; and second, no terrestrial machine an entire half-century after this event can even approximate its performance.

That leaves the third explanation: the object was an extraterrestrial vehicle.