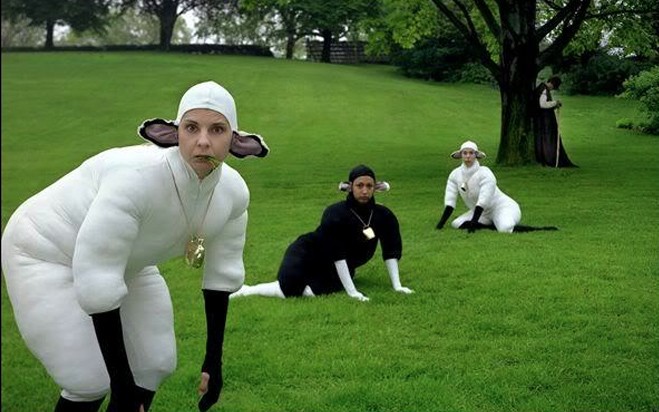 I once read that “Scotland has more sheep than people,” and the quadrupeds stampeded to the polls to vote against the proposition that they liberate themselves from their historic enclosure.

“Independence is a b-a-a-a-d idea,” many were heard to say. The campaign against the proposition recited the lemming mantra, “together is better.”

Taken literally, the oft-heard phrase “no thanks to independence” carries the message “dependency is preferable to the sense of responsibility that is implicit in liberty.” That 55% of the voters could be so terrified of their independence is a reflection of how years of conditioning in the virtues of subservience produce the herd mindset.

The mainstream media informed us that David Cameron was greatly pleased by the outcome. It is the nature of politics that this statement is true. Political thinking has trained people to believe in the 51% principle: no idea is worthwhile unless 51% of the public believes in it.

But imagine a man with nine children, and four of them dislike the father so much that they want to vote to have all siblings leave home. The vote is held and, by a 5 to 4 margin, the pro-big daddy side wins. Would any loving psychologically-healthy man consider this to be a great personal victory?

Opponents of this measure were quick to announce that the question of Scottish independence has been settled, “once and for all,” words that mean “when we get the outcome we want, the issue can never be brought up again.”

All-in-all, the outcome of this vote was a referendum on the ageless choice people must make between individual liberty and collective security. That 45% of my Scot relatives made the choice for liberation is not only encouraging, but a sign of the greater movement by which men and women are working to end the destructive nature of politically-directed society.

As for the 55% naysayers, they can return to the quietude of their pen, to await whatever fate their duly-elected Judas-sheep has planned for them.