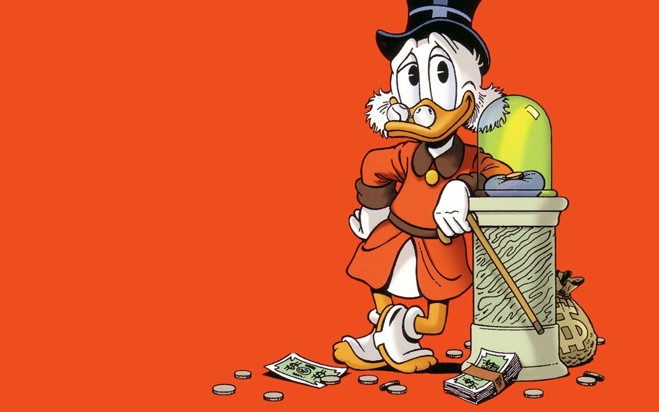 Charles Dickens wrote “A Christmas Carol” in the hope of earning enough money to pay off a debt.

Dickens was obsessed with debt. His father had been imprisoned for debt, and Dickens was taken out of school and put to work to support his family.

So he made Scrooge a money-lender.

Dickens saw Christmas as a celebration of feasting. All around Scrooge on the day before Christmas, there were preparations for a feast. From rich to poor, men were preparing for a great meal.

Scrooge made no such preparations, indeed he resisted invitations to the point of rudeness.

The sky was gloomy, and the shortest streets were choked up with a dingy mist, half thawed, half frozen, whose heavier particles descended in a shower of sooty atoms, as if all the chimneys in Great Britain had, by one consent, caught fire, and were blazing away…

But the people there were happy.

For, the people who were shovelling away on the housetops were jovial and full of glee; calling out to one another from the parapets, and now and then exchanging a facetious snowball — better-natured missile far than many a wordy jest — laughing heartily if it went right and not less heartily if it went wrong.

Matching the joy of the people were shops filled with food. Here, Dickens’s can barely stop himself from describing bounteous food made available during the Industrial Revolution:

The poulterers’ shops were still half open, and the fruiterers’ were radiant in their glory. There were great, round, pot-bellied baskets of chestnuts, shaped like the waistcoats of jolly old gentlemen, lolling at the doors, and tumbling out into the street in their apoplectic opulence. There were ruddy, brown-faced, broad-girthed Spanish Onions, shining in the fatness of their growth like Spanish Friars, and winking from their shelves in wanton slyness at the girls as they went by, and glanced demurely at the hung-up mistletoe. There were pears and apples, clustered high in blooming pyramids; there were bunches of grapes, made, in the shopkeepers’ benevolence to dangle from conspicuous hooks, that people’s mouths might water gratis as they passed; there were piles of filberts, mossy and brown, recalling, in their fragrance, ancient walks among the woods, and pleasant shufflings ankle deep through withered leaves; there were Norfolk Biffins, squat and swarthy, setting off the yellow of the oranges and lemons, and, in the great compactness of their juicy persons, urgently entreating and beseeching to be carried home in paper bags and eaten after dinner. The very gold and silver fish, set forth among these choice fruits in a bowl, though members of a dull and stagnant-blooded race, appeared to know that there was something going on; and, to a fish, went gasping round and round their little world in slow and passionless excitement.

Today, we take for granted the easy availability of food, and can barely be bothered to read about berries and biscuits, but in Dicken’s time it was a revelation.

The people had hope for tomorrow’s celebration, and through this feast, they affirmed hope for the future. It was a ritual affirmation that announced, “There’s more where that came from.” 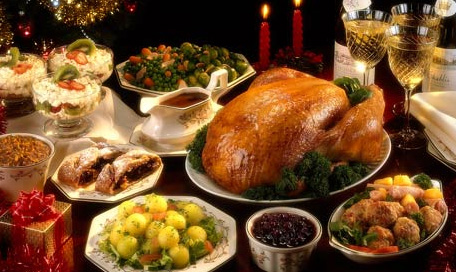 By 1843, this was not a vain hope in London. It was verified daily by the world around them. Dickens was living in the second generation after the Industrial Revolution began.

Men were escaping at long last from their dependence on the weather and the soil. Nature was losing its grip on men’s lives because of the growing division of labor, and the benefits of a free market as described by Adam Smith in 1776.

Excepting only the famine of the 1840s in Ireland, which began while Dickens was writing his story, the West would not again experience a famine. That long-dreaded horse of the apocalypse was put out to pasture.

The driving force of this revolution was specialization — specialization funded by capital, acquired by savings, and tracked with double-entry bookkeeping, by men like Ebenezer Scrooge.

It was men like Scrooge who created the christmas feast.

In an environment of scarcity, there must be careful attention to costs of production and profit opportunities, which are found where consumers demand to be served.

Dickens did not understand this. Neither have generations of capitalism’s critics. They accept Marley’s self-condemnation.

Yet no single man can solve all the woes of mankind.

It is the specialization and market competition — forced on all producers by consumers — that has reduced the burden of poverty.

The results of this process were visible in the shops of London in 1843, and Dickens described them well. But he did not understand their origin.

Scrooge is a miser. He has a shriveled soul. He has a highly specialized notion of what constitutes a meaningful life.

Yet without Scrooge and men like him, who are devoted to the details of their businesses, the shops of London would not be filled with cornucopias — at Christmas or all year round.

The heart of capitalism is service to the consumer. In serving the consumer, the producer must pay attention to what the consumer wants, at what price, when, and where. And employees are consumers too.

In the end, Scrooge comes to his senses and shows up at the Fezziwig’s party.

Some people laughed to see the alteration in him, but he let them laugh, and little heeded them; for he was wise enough to know that nothing ever happened on this globe, for good, at which some people did not have their fill of laughter in the outset…

The free market does not make men good. It does encourage them to serve the consumer. It forces losses on them if they are less efficient in their service than their competitors.

The free market society is not a dog-eat-dog world. It is dog-serve-master world, and the consumer is the master.

Dickens understood that Fezziwig had the right approach, and Scrooge learned to express a little more joy in the process of his prospects.

In the movie version of the story, Fezziwig goes out of business because he cannot compete in the new world of capitalism.

But Dickens never hinted that this was the outcome of Fezziwig’s good cheer. My guess is that Fezziwig died rich. If he treated his employees well, he was probably in the habit of treating his customers well.

May that be said of all of us. And so, as Tiny Tim observed, God bless Us, Every One!