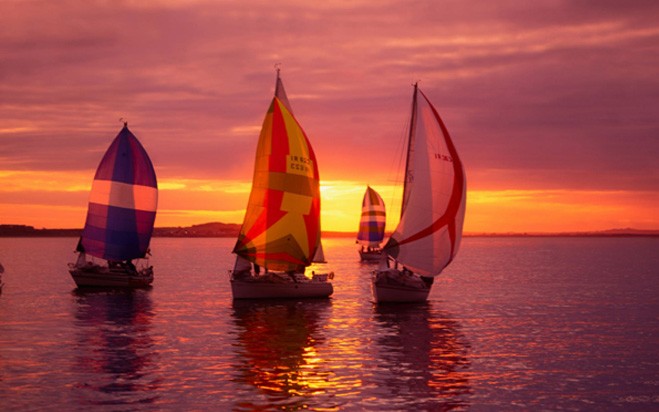 It is almost six o’clock when the two Japanese girls come into the Phuket Yacht Club’s Quarterdeck Restaurant.

Thamanoon is standing by a potted palm, his hands elegantly folded around a menu, staring out at the boats on the bay. This time of year, just after the King’s Cup Regatta, the bay is full of boats and the hotel is nearly empty of guests.

Thamanoon loves to watch the boats.

He resents the intrusion of the two Japanese girls, though a thousand years of Asian culture and four years of training in the hotel make it impossible for him to show it.

Six o’clock is the slowest time of day in the restaurant; most of the guests will wait for the evening to cool down before eating their final meal. Kamol is on his break and Wiwat is in an English class, so Thamanoon is alone on the floor.

He leaves the shadow of the potted palm and glides forward to meet the Japanese girls.

Thamanoon knows the girls from their last stay in the hotel, and he gives them his number four smile with the greeting. They’ve just come from the pool, and their hair is wet where it hangs down over their white terrycloth robes.

He sneaks a look over Miss Mikosan’s shoulder at the boats on the bay. Miss Miyagisan has the best English and she always speaks for the pair.

“We are fine, shank you. And you?” Her words carry the same rehearsed quality that Thamanoon’s do.

“I am fine, dank you. Would dis tabuhn be awright?”

He holds their chairs and opens the menus before presenting them, all the time smiling and making warm eye contact. Thamanoon makes the best tips of any of the waiters; he has his eye on a new motorcycle and his parents want him to marry Ying, the village headman’s daughter.

He could have one or the other on his salary, but not both.

As he pours their water and gently lays their napkins across their laps, his gaze flits over the heads of the Japanese girls to the bay, to the shadows of almost a hundred masts rapidly lengthening across the flat water as the sun goes down.

Miss Miyagisan orders spaghetti with meat sauce for them both, and some sweet drinks from the bar. Thamanoon takes the order into the kitchen as quickly as he can and still maintain decorum.

He doesn’t like to leave the dining room this time of day; he’s afraid it will happen and he’ll miss it.

He stands by the bar and waits for their drinks and watches the sky turning red over the ocean. He can see hundreds of cars and buses lined up on the lookout point at Phrom Thep Cape, and streaks of crimson run down the masts of the windmills at the government power station.

When he brings them their drinks the Japanese girls are each staring into a compact mirror and applying snowy white powder to their faces.

He arrives at the table, places the tall glasses topped with fruit and paper umbrellas onto the starched linen tablecloth, smiles at each of them and retreats.

At no point does he make any sound.

The girls each take out slim cigarettes, light them, toss their hair once, and taste their drinks. They judge the drinks acceptable and begin to talk in rapid giggles.

Thamanoon is watching anxiously now. He’s afraid that the girls’ order will be ready while it’s happening and he’ll miss it. The sunset is magnificent, and the tourists on the lookout point are taking pictures; in the dimming light Thamanoon can see the flashes of their cameras.

The eastern sky is darkening and a stillness has fallen, the sea is dead calm now without a breath of wind, and despite the vaulted ceilings and open walls on three sides it seems stuffy in the restaurant.

Thamanoon hears the bell from the kitchen and fairly jumps to get the orders. He brings the girls their spaghetti as fast as he dares, lays the food on the table with a grace and economy of motion that would give a bullfighter a long and healthy career, supplies the condiments and cheese and says, “Willderebeanyt’ingelse?”

“No, shank you,” says Miss Miyagisan, and Thamanoon is away to his potted palm.

He positions himself so that it appears as though he’s looking in the direction of where Miss Miyagisan is trying to teach Miss Mikosan how to twirl the spaghetti around the fork in the bowl of her spoon, but in fact his attention is completely at sea.

He has no thoughts of the new motorcycle now, no thoughts of marriage or his job or the boxing match that he will watch on TV later. His whole world, for this moment, is the bay and the boats.

And as the sun disappears below the horizon, and the long lines of buses and cars begin to creep down the mountain from Phrom Thep Cape, the wind picks up again.

But now the wind is from offshore, and the windmills and then all the boats turn to face it, the lighter boats first and then the larger ones, swinging around 180 degrees on their anchor chains like a flock of birds wheeling in the sky.

And Thamanoon is rooted to the spot, oblivious to the Japanese girls calling for more drinks, as in the bloody glow of the dying sun all the beautiful boats are dancing just for him.