Mr. Randleman impacted my life when I was around 12 years old.

There was a DVD put out by Pride Fighting Championships called “Best Knockouts Vol.1,” which my brother and I used to watch religiously and attempt to recreate far more times than my parents had wished. 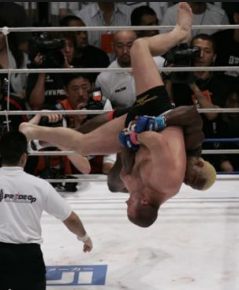 We loved watching Kevin Randleman body slam Fedor Emelianenko on his head over and over again. The film also showcased many other highlights from “The Monster’s” career.

After a club baseball game in Las Vegas, I noticed this HUGE human being in the parking lot who had just finished a softball game from one of the other fields with bleach blonde hair. How many other black guys do you know that dye their hair platinum blonde?!

Immediately, I was starstruck. I knew it was Kevin. The man I had idolized through a DVD was hanging out at a sports park that I have played at countless times.

I told my parents as they walked on to the car that I would be back, I wanted to introduce myself to this hero of mine. I walked up to his car, put my hand on his shoulder and said “Excuse me Mr. Randleman may I shake your hand? My name is Alex Ayers and me and my brother love to watch you fight.” Insert a couple of stammers and stutters in that quote and you get the point.

Mr. Randleman didn’t blink an eye, he turned the formal handshake into a hug and invited me, a 12 year old in a baseball uniform, to hang out with him and his friends for a little.

I told him that my parents were waiting on me, so Kevin waved mom, dad and Quinn over to come hang out as well. This is a Pride Fighting Champion we’re talking about. Kevin introduced himself to my whole family and afterward he gave me his number and told me to reach out to him whenever I needed anything.

It was hands-down one of the best nights of my life and I told everyone at school the next couple of weeks/months/years that I knew Kevin Randleman regardless of whether they knew of him or not.

A couple of months later, my brother was having a birthday party and we were going to order the UFC fights. I texted Mr. Randleman and asked if he was busy that weekend and invited him to the party. Mr. Randleman replied to me within minutes, “I’m training for most of the day, but I’ll be there.”

Is this real life?

Did I really text Kevin Randleman and did he really say that he’ll come to my little brother’s birthday party?!

Quinn’s birthday arrives and I get a call later in the night: “Yo Alex! It’s Kevin, how do I get to your house my dude? I’m lost.” There I was, at 13 years old, telling Pride Fighting Champion Kevin Randleman directions to get to my house over the phone.

Kevin came to the house with an autographed Kevin Randleman action figure for my brother. How cool is that?! He stuck around the party for about an hour or two, taking pictures with everybody, showing off his tattoos, telling stories and letting us younger ones arm wrestle him as well as ask him questions about his keys to success.

Mr. Kevin Randleman was an amazing fighter, an unconventional friend of mine and my role model. He chose to nurture a relationship with me when I knew he could have been doing many other things with his life. He was a father, a husband and truly inspiring person.”