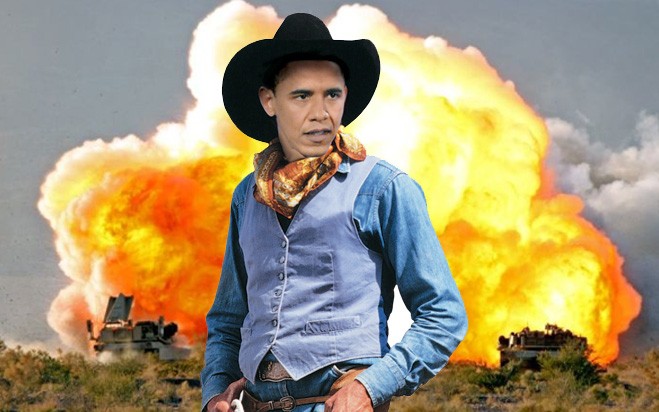 So the Nobel Peace Prize winning President wants to go to war… again.

I know there is a segment of the population who revels in the glory of projecting American military might abroad. Like some sort of roving soccer hooligans looking to put the smackdown on “the other team” whoever they might be.

According to many news sources and war-loving politicians, accusations of Assad using chemical weapons are almost undeniable.

Okay then, I’m going to deny it.

Where is the evidence that Assad ordered the use of gas on his own citizens? If its so undeniable then lets see it. Such an attack makes no sense.

If the insurance company were on the way to your house to investigate an arson, would you set your garage on fire?

But someone who hates your guts might set your garage on fire to get you in trouble.

I smell a rat.

But Obama’s red line has been crossed, the ships are on the way and the cruise missiles will soon fly.

But who deputized Obama as Dirty Harry to walk the global streets gunning down bad guys?

So they crossed his “red-line?” Big deal. He wasn’t elected to draw red-lines, and neither Congress, the UN Security Council, NATO, nor the Arab League for that matter has authorized war on Syria.

Firing a few shells of gas was not going to help Assad, but was certain to entice those in the U.S., who want war on Syria as the back door to war on Iran.

Why did the United States so swiftly dismiss Assad’s offer to have U.N. inspectors go to the site of the latest incident?

Do we not want to know the truth?

Are we fearful the facts may confirm of Weapons of Mass Distraction?

With ships on the way and the McCainiacs assuring us we can smash Syria from offshore without a problem, why is Congress silent?

Lest we forget, Ronald Reagan was sold the same idea in the Lebanese Civil War. Reagan listened and sent in the Marines.

And he was there when 241 dead marines and dead diplomats from the Beirut embassy returned. He called it the biggest mistake he made while in office.

Congress should end its vacation early, come back and debate on whether America wants another war. The questions that need answers:

The sole beneficiary of this apparent use of poison gas against civilians in rebel-held territory appears to be the rebels, who have long sought to have us come in and fight their war.

Are we prepared to be their puppets?

Do we really want a bunch of ragtag, radical, muslim fundamentalists to take over Syria?

It appears that President Obama does.

Dinesh D’Souza hypothesized in his film, 2016: Obama’s America, that Obama’s primary foreign policy goal is “anti-colonialism.” And come hell or high water, his sporadic meddling in the Middle East seems to confirm it.