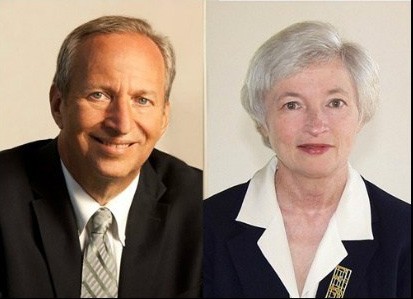 Who Will Be the Next Fed Honcho?

Bernanke is on the way out, and the hunt for a replacement to lead America’s central bank is on.

Anyone smart enough to see the mess Bernanke has made by propping up the economy with endless bond purchases and QE, wants nothing to do with being blamed when it begins to unravel.

That leaves us with Larry Summers and Janet Yellen as the potential candidates.

Summers has a long and impressive resume, having served in the Reagan and Clinton White Houses, as President of Harvard University, and Chief Economist of the World Bank.

He also has a trail of scandals few can match. Summers was a key proponent in relaxing the Glass Steagal laws on the banking industry and also in the creation of the financial derivatives that nearly brought down the entire financial system in 2007. Not to mention being forced to resign from Harvard.

Summers is not going to be nominated.

Janet Yellen will be the next Chairman of the Fed.

What are her qualifications?

She will get the job because President Obama will not be able to resist nominating the first female Chairman of the Fed. It’s all about symbology.

The Washington Post ran a puff-piece on Yellen extolling her virtues and how she “called the housing bust.” 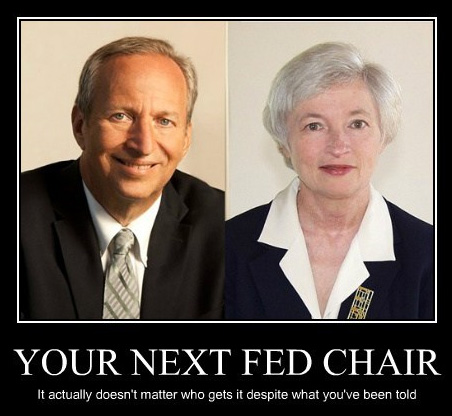 Neither Yellen nor Summers is qualified. In fact, there is not a single person who would take the job that is qualified.

The idea that a group of economics professors can micromanage the economy from a conference room in DC is preposterous.

The clowns at the Fed have proven time and time again that they have no idea what interest rates should be.

The dot-com bubble followed by the housing bubble is proof of that.

And now the Fed that Yellen sits on has created new bubbles in stocks and bonds that she cannot – or refuses to see.

The only candidate that would make any sense is the one who would close the Federal Reserve for good.

If the choice is between Tweedledumb who wants to slosh even more money around, and Tweedledumber who will do whatever Wall Street tells him to do.

Is there really a difference?

Related Story: Who Will Save Bernanke?