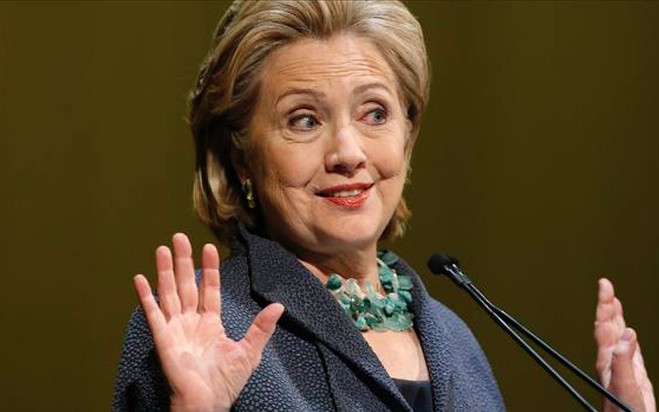 According to CNN Hillary Clinton pushed the Trans-Pacific Partnership at least 45 times while Secretary of State.

In 2012 for example, she said the Trans-Pacific Partnership “sets the gold standard in trade agreements to open free, transparent, fair trade, the kind of environment that has the rule of law and a level playing field.”

But now, she is speaking out against it. According to Slate she’s said:

“I’m continuing to learn about the details of the new Trans-Pacific Partnership, including looking hard at what’s in there to crack down on currency manipulation, which kills American jobs, and to make sure we’re not putting the interests of drug companies ahead of patients and consumers. But based on what I know so far, I can’t support this agreement.”

If you believe that Hillary Clinton is spending her nights studying an agreement that she couldn’t be bothered to read while she was in a position to do something about it, then I’ve got a bridge to sell you.

It’s pretty safe to say Clinton does not give a damn about free trade one way or another. She could probably argue the position both ways at the same time – while chewing gum.

So why flip-flop on an issue that the average person knows nothing about?

Hillary is trying to keep up with Bernie Sanders who is eating her lunch in the polls.

Bernie and his socialist zombie followers are enjoying a tirade over the supposed evils of the ‘free-trade’ TPP.

Nevermind that an actual free-trade agreement would take only one sentence: No taxes, no tariffs, do what you want.

And that’ll make it all the easier for Hillary to flip-flop back to loving it, if and when she gets the nomination, and her followers will be none the wiser.