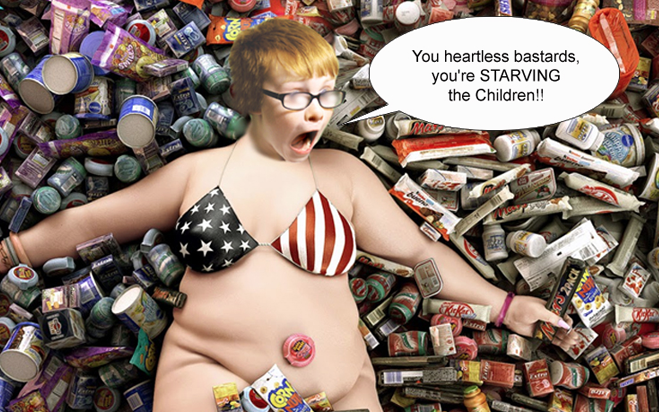 Twenty years ago, hysteria swept through the media over “hunger in America.”

Dan Rather opened a CBS Evening News broadcast in 1991 declaring, “one in eight American children is going hungry tonight.”

Newsweek, the Associated Press and the Boston Globe repeated this statistic, and many others joined the media chorus, with or without that unsubstantiated statistic.

When the Centers for Disease Control and the Department of Agriculture examined people from a variety of income levels, however, they found no evidence of malnutrition among those in the lowest income brackets. Nor was there any significant difference in the intake of vitamins, minerals and other nutrients from one income level to another.

That should have been the end of that hysteria. But the same “hunger in America” theme reappeared years later, when Senator John Edwards was running for Vice President. And others have resurrected that same claim, right up to the present day.

Ironically, the one demonstrable nutritional difference between the poor and others is that low-income women tend to be overweight more often than others. That may not seem like much to make a political issue, but politicians and the media have created hysteria over less.

The political left has turned obesity among low-income individuals into an argument that low-income people cannot afford nutritious food, and so have to resort to burgers and fries, pizzas and the like, which are more fattening and less healthful.

But this attempt to salvage something from the “hunger in America” hoax collapses like a house of cards when you stop and think about it.

Burgers, pizzas and the like cost more than food that you can buy at a store and cook yourself. If you can afford junk food, you can certainly afford healthier food.

An article in the New York Times of September 25th by Mark Bittman showed that you can cook a meal for four at half the cost of a meal from a burger restaurant.

But then Mr. Bittman says that the problem is “to get people to see cooking as a joy.” For this, he says, “we need action both cultural and political.” In other words, the nanny state to the rescue!

Since when are adult human beings supposed to do only those things that are a joy? I don’t find any particular joy in putting on my shoes.

But I do it rather than go barefoot.

I don’t always find it a joy to drive a car, especially in bad weather, but I have to get from here to there.

An arrogant elite’s condescension toward the people — treating them as children who have to be jollied along — is one of the poisonous problems of our time. It is at the heart of the nanny state and the promotion of a debilitating dependency that wins votes for politicians while weakening a society.

Those who see social problems as requiring high-minded people like themselves to come down from their Olympian heights to impose their superior wisdom on the rest of us, down in the valley, are behind such things as the hunger hoax, which is part of the larger poverty hoax.

We have now reached the point where the great majority of the people living below the official poverty level have such things as air-conditioning, microwave ovens, either videocassette recorders or DVD players, and own either a car or a truck.

Why are such people called “poor”? Because they meet the arbitrary criteria established by Washington bureaucrats. Depending on what criteria are used, you can have as much official poverty as you want, regardless of whether it bears any relationship to reality.

Politicians, welfare state bureaucrats and others have incentives to create or perpetuate hoaxes, whether about poverty in general or hunger in particular.

The high cost to taxpayers is exceeded by the even higher cost of lost opportunities for fulfillment in their lives by those who succumb to the lure of a stagnant life of dependency.