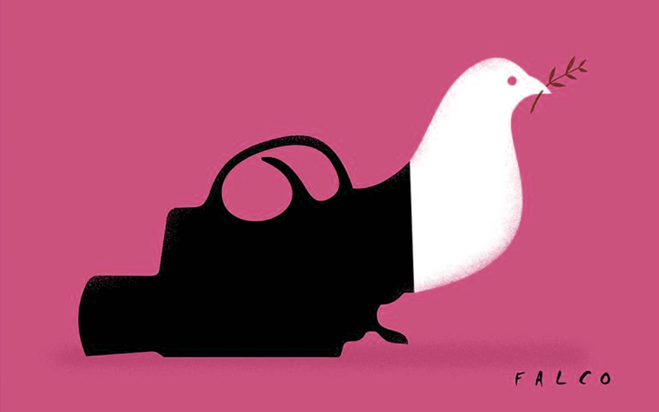 So you want to end gun violence? Cool. Me too. But what to do about it? The key word being DO, not just whine and point fingers.

Accept that there is no magic “make all the guns disappear” button, and that criminals do not obey laws. The sooner we can move on from nonsense the sooner we can address reality in a practical manner.

War is not fun. Jumping around shooting at people and dodging bullets is not cool. Violence is a part of life, but glorifying it is not. Movies like ‘Kill Bill’ and ‘Natural Born Killers’ are pornographic in this regard. Horror movies, and video games like “Grand Theft Auto” and “Call of Duty” are not far behind. Hollywood is not going to stop making this shit until you stop watching it.

4. Stay away from police.

The best way to do this is to not break the law. But since some people just won’t be able to resist, perhaps high-school’s ought to have a course on how to deal with the police without getting shot. Hundreds of lives could be saved just by watching the Chris Rock video on “How to not get your ass kicked by the police…”

Wherever you go, high-crime neighborhoods are characterized by absent fathers. A good father is the role model and enforcer that so many teenage boys need to keep them on the right path.

Where did all the good dads go? The Welfare state chased them away. Benefits are contingent on not having a man in the household and so the men are sent away. Wherever welfare is widespread, so is gun violence. Witness the south side of Chicago, Detroit, and Baltimore.

Seriously, Stop breeding with assholes. Women have a weak spot for “bad boys.” There are evolutionary reasons for being attracted to a man who can attain resources no matter what, ie. criminals. Well, you’ve got to resist this urge ladies because it turns out that asshole-ism is partly genetic. The Las Vegas shooter’s mother had four kids with a psychopathic bankrobber.

Children model the behavior of their parents. Spanking is assault, the beginning of a cycle of violent problem solving. Yeah, yeah, you were spanked and turned out fine, good for you. But the stats on this topic lean the other way. In a study of 45,000 ninth-graders, kids who were beaten by their parents were five times as likely to commit repeated crimes.  Not only that, but children who were beaten are far more likely to stockpile weapons.

Sorry, but no amount of proclaiming that diversity is our strength is going to change this aspect of human nature. There is a reason that culturally uniform countries like Japan, Iceland, and Qatar have such low crime rates. UNIFORMITY is their strength. Places that are already widely diverse would do well to seek commonalities, rituals of unity, even if only in small ways, you know… like standing for the national anthem.

Besides the violence associated with the illegal drug trade, withdrawal symptoms from prescription anti-depressants seem to be highly connected with mass-murderers. Think twice before advocating pills as problem solvers.

11. Stop patronizing violence in the world.

When you drop bombs on people they get mad. When people get mad, sometime they kill you back. Don’t do that. Hate to break it to you but “your” freedom is not being defended in Afghanistan, Syria, Libya, etc.

You don’t let random strangers wander into your house. A country is no different. And as for the idea that this is a “nation of immigrants,” NO ITS NOT. The vast majority of people in this country were born in this country, they are NOT immigrants. Considering that 47 of the top 50 most violent (per capita) countries on earth are in Latin America and Africa, those may not be the best sources for newcomers.

There is no more peaceful way for mankind to conduct affairs than by the peaceful and voluntary exchange of goods and services. Socialism can only exist by forcing the exchange of goods at the point of a gun. All the happy talk about free this and free that is simply a disguise for the threat of force, do what we say or else. When you force people to do things, they get mad, some get violent…

As long as you pick a good one, not a stupid one that promises you 40 virgins for blowing up a bus. I’ve chosen Zeus by the way, no one takes him seriously anymore and I figured his morale could use a boost.

Yes there is such a thing as good and bad, right and wrong. It’s not all relative. You are under no obligation to tolerate or accept evil because you’re afraid of hurting someone’s feelings. People with stupid ideas should have their feelings hurt.

People who are for “gun control” are not against guns, they are very pro-gun. They just want government to have all the guns. Open a history book. Nothing has killed more people – with guns – than governments.

Seriously, how hard is it to let someone change lanes without being a dick? Oh and does everyone who disagrees with you have to be Hitler? Back down the holier than thou just a notch, okay. Having a hard time being nice? Just pretend everyone has a gun and all of a sudden saying, “Yes sir, excuse me, please go ahead, etc” will seem like a very good idea.

So, will all of this end gun violence? Probably not. But neither will hanging up more Gun Free Zone signs, passing another law that criminals ignore, or crying along with Jimmy Kimmel. And these are at least things YOU can do, besides just whining.

Don’t like my ideas? That’s fine. Come up with a better one…