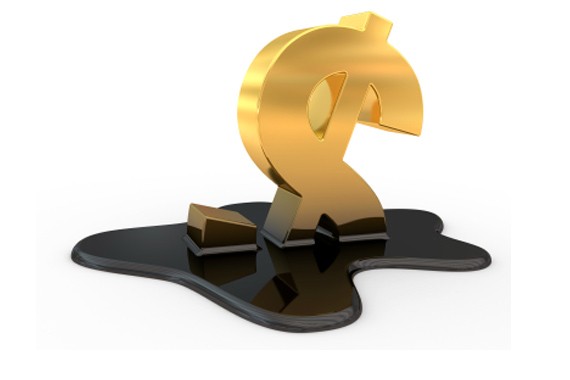 In the current comic book news, there are three main “bad guys”: Russia, Iran, and China.

Oh you’ll hear all kinds of stories about Putin being a tyrant, Iran threatening Israel, and China being a currency manipulator, but all of that is distraction.

To really understand the world you must follow the money.

There are many possible starting points in this story, but the key one was in the early 1970s when Nixon and Kissinger made a deal with the devil.

You see, Nixon had closed the gold window, effectively telling other nations that they could no longer trade in their US dollars for gold.

The problem was that if they couldn’t redeem dollars for gold, then how would anyone know what a dollar was worth? Why would anyone want dollars at all?

The repressive kingdom that just happens to be sitting on the world’s largest oil reserves. A deal was made in which the U.S. would provide a security guarantee to the Saudis, if the Saudis agreed to sell their oil ONLY in U.S. dollars and to use those dollars to purchase U.S. Treasury Bonds. 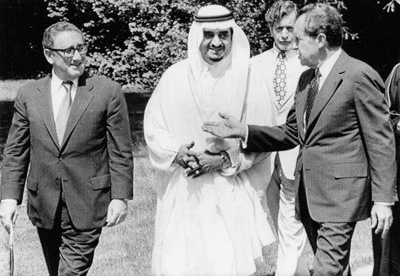 The “Petrodollar” was born – backed by oil – Saudi oil.

From that point onwards, anyone who wanted to buy Saudi oil – Japan, China, India, Korea, France, etc. – had to first acquire U.S. dollars, or more specifically U.S. Treasury bills. And so a multi-decade bull market in treasury bills began. 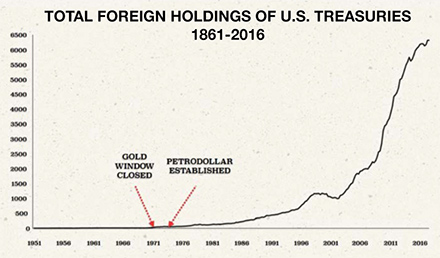 It seemed like a great idea. What could possibly go wrong?

Well, along with this inflow of foreign investment came a lot of uncertainty. Where oil – along with the dollar – had previously been priced in gold, now it was priced by the whims of Saudi princes. 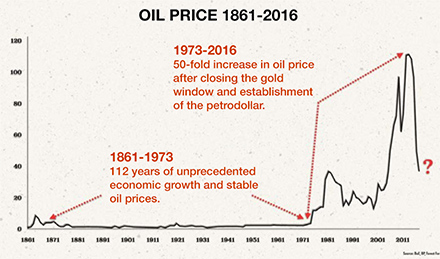 Many of the political struggles and conflicts of the past several decades have at their root this bizarre relationship between the U.S. dollar and oil. But for decades there was simply no other way.

The countries of the world needed oil to fuel to their economies, and so the U.S. dollar reigned supreme.

More recently, many nations are increasingly asking, why bother with U.S. dollars to purchase oil? Especially since oil rich nations like Russia and Iran have no such agreement.

In 2012, Iran began accepting Chinese Renminbi for oil purchases. According to a Financial Times article, it then uses the Chinese currency to import goods and services from China, and much of the money is transferred through Russian banks.

By making purchases this way, China reduces its need to purchase U.S. Treasuries, while circumventing the Petrodollar entirely.

Good for China, good for Iran, good for Russia, (all the comic book bad guys) but not so good for the U.S.

Although you will frequently hear U.S. politicians complain about China, the fact of the matter is that it is the U.S. that has been ripping China off for decades. Billions and billions of inexpensive products imported from China have raised the standard of living in the U.S. immensely, particularly for the less affluent. Consider the success of Walmart.

But what has China gotten in return for all this physical wealth? Paper. Paper with fancy designs printed on it that represent nothing more than a promise of more paper in the future. U.S. Treasuries.

Question: What happens if China demands payment in something other than paper? What exactly does the U.S. have to trade? Weapons? Hollywood movies? Unemployable college students? 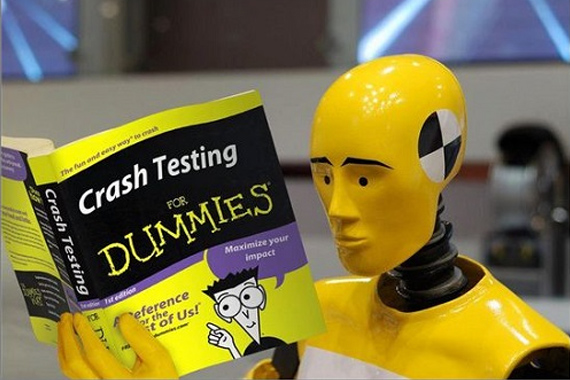 That same year, the chairman of the Shanghai Gold Exchange announced that gold too would be priced and sold in renminbi. He said,

“Shanghai Gold will change the current gold market “consumption in the East priced in the West” situation.” Assuring the world that the ‘real’ price of gold would become apparent once China took its rightful place as the center of the gold market.

In 2015, another announcement slipped by the western press when it was revealed that Russia would begin selling oil and gas to China priced in renminbi and rubles, settling trade directly, without U.S. dollars.

In 2016, you may recall a report showing Saudi involvement in the attacks on 9/11. Whatever happened to that?

“Saudi Arabia has told the Obama administration and members of Congress that it will sell off hundreds of billions of dollars’ worth of American assets (Treasuries) held by the kingdom if Congress passes a bill that would allow the Saudi government to be held responsible in American courts for any role in the 9/11 attacks.”

All investigation and or lawsuits against Saudi Arabia vanished. Nixon’s deal with the devil had come back to bite.

Two days later, the Saudis were the cause of a “surprise” failure by OPEC to agree to a production cut. According to the Wall Street Journal, April 17, 2016,

“talks collapsed after Saudi Arabia surprised the group by reasserting a demand that Iran also agree to cap its oil production.”

48 hours after that surprise, China started quoting the price of gold in renminbi. According to Bloomberg, April 19, 2016,

Little by little, step-by-step, the pieces are being put in place to undo what was done in 1971. The petrodollar is dying.

In the past ten years, China has increased its gold reserves by 300%, Russia by 400%, and Iran has been importing huge amounts of the precious metal to circumvent sanctions imposed by the U.S.

Gold is on the verge of becoming money again, but this time it will not be the U.S. dollar that is “good as gold.”