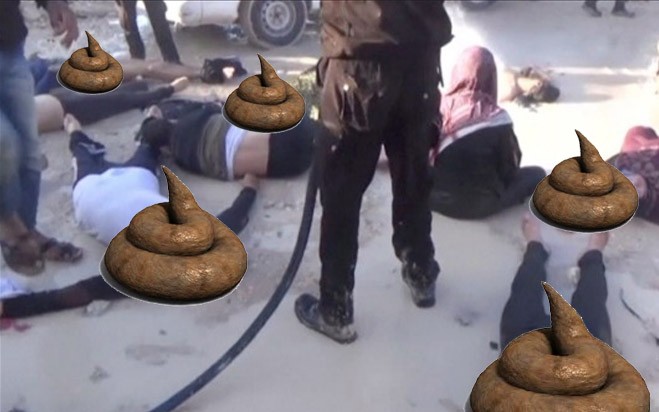 1. Does anyone actually know what happened with the so-called “gas-attack?” Nope. Photos were taken by two Agence France photographers, neither of whom had any idea as to the source of the gas, but that didn’t stop commentators thousands of miles away from assigning it to Assad.

2. Even UN Ambassador Haley said, ”We don’t yet know about yesterday’s attack.” Then why the fuck are you sending cruise missiles anywhere?

3. The Pentagon alleges (without evidence) that Sarin gas was stored at the airport. But Sarin gas is odorless and the photographers on the scene said, “The first thing that hits you is the smell.” The Syrian government has the capability to make Sarin gas, so why would they use a smellier, and thus more traceable, chlorine gas, and expose themselves to blame? They wouldn’t.

4. How is it that these reporters – who according to one’s Twitter account is anti-Assad – came across this particular event? Who led them or advised them to go there? I will not hold my breath waiting for this question to be asked, much less answered.

5. Who gains from the missile strike? Islamic rebels (ie. fucking lunatics who go around cutting the heads off of people who disagree with them) are praising the strike and calling for more US intervention to overthrow Assad. Yes, in bizzaro-land we are now providing air support for Al-Queada.

The US airstrike delivers a message to al-Qaeda. Whenever under military pressure al-Qaeda can now stage or fake a “chemical attack” and the US will act to destroy its enemy,

6. Trump ran on a campaign of fewer foreign interventions, of putting the American people’s interests first. How the fuck is bombing an airfield in Syria of any use to you? Yes, YOU, personally. It isn’t. Score +1 for the swamp.

7. It is illegal. The U.S. was not attacked by Syria, no declaration of war has been made. This attack is just as illegal (and stupid) as Obama’s interventions in Libya.

8. Forcing this attack is what all the retarded Trump/Russia collusion fake news has been about. Creating a political situation in which cooperation with Russia is nearly impossible, and driving towards the conflict that the “swamp” wants. Just look, many of his critics on CNN, MSNBC are now gushing about how great he is.

9. How is this attack any different from what a Hillary foreign policy would look like? It isn’t. It’s fucktarded.

10. Again, no hard evidence has been presented that events are as presented on major media, and yet they have all immediately jumped on the “Assad is the bad guy narrative.” It’s not news. They are simply reading CIA and Pentagon press releases.

Sigh… At least we got Gorsuch.