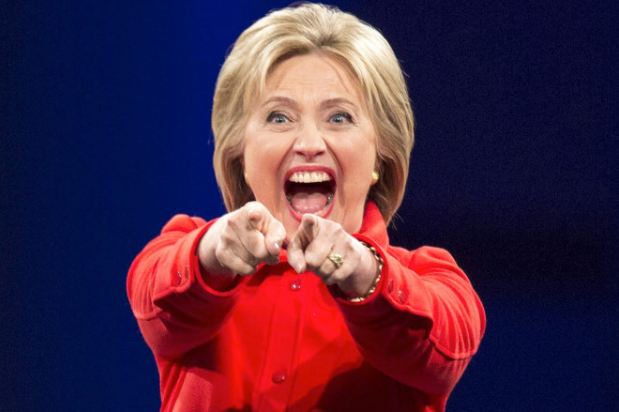 Just can’t get enough of the failed Middle East policy of bombing people into Democracy? Well now, war is new and improved! Mrs Clinton wants to enforce a “no-fly-zone” over Syria, and whose planes are currently flying over Syria? Russia! Oh that’s a great idea, let’s get into a war with a nuclear armed state, what could possibly go wrong?

Don’t you just hate all those bigoted sexist jerks? Get out there and show them that sex doesn’t matter, by, you know, voting for someone based on what sex they are. If there’s one thing informed voters can agree on, the White House needs more vagina. Just ask Bill Clinton.

Ah Bernie, where have you gone? He gave voice to the Occupy Generation like no other. Madly popular, but deep sixed by the big-bank backed Clinton gang and her media assassins. Worst of all, they extorted him to get on stage and endorse his oppressor, so get out there and stick another knife in Bernie’s back.

Ah, isn’t it wonderful how President Obama has united the races under his administration. All those riots in Ferguson, Charlotte, Milwaukee are really just big parades of togetherness. Don’t you want to keep the love going?

Recent Wikileaks emails reveal what appears to be an organized ring of pedophiles, centered around Clinton campaign chairman John Podesta. And then there’s Bill Clinton’s 20 plus trips to Jeffrey Epstein’s Sex Island… And then there’s Anthony Weiner… But don’t worry, where there’s smoke there’s no fire. And you don’t want your friends to think you’re a pedophileaphobic do you?

It’s getting hotter, no wait, it’s changing, yeah yeah, and change is bad, unless it’s Obama Change, and then change is good. But wait, the climate was like perfect before Al Gore made his movie, yeah, let’s totally go back to 2006. Congress can fund a time-machine. We’ll control the weather with laws, it’ll be just like ‘gun-free zones.’

Let’s face it. You don’t actually have a clue what’s going on in the world. You just get your opinion from comedians, actors, and the Daily Show. It’s waaay easier than research, logic, and thinking. Hey, all your friends do it too, and the most important thing is to go along to get along.

Let’s face it, you’ve made some really stupid decisions. Maybe you got pregnant at 16 by some guy who went to jail, and you’ve got no way to take care of the screaming brat without taking money from people who didn’t make the same stupid error. Or maybe you’re older, but you spent all your money on stupid shit you didn’t need, you never saved anything for retirement, and now no one will hire you. Your life is a mess, but why should you face the consequences when you can make other people face them?

So take one quick look in the mirror, say “I suck,” then get out there and vote!