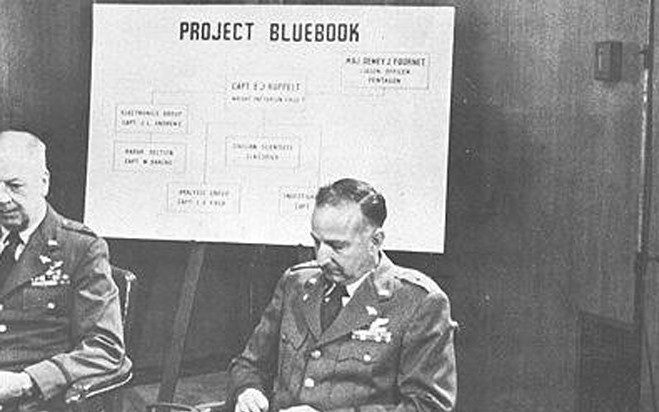 When Ruppelt rejoined the Air Force he was sent to ATIC to analyze the performance of the Russian MiG-15 jet fighter that American pilots were facing in Korea.

UFO reports were still arriving at the moribund Project Grudge. Ruppelt’s desk was near the Project Grudge desk and now and then he would look over some of the UFO reports.

The Grudge message in 1951 was that UFOs were either out- right misperceptions or would be classified as misperceptions if more information were available.

In September 1951 the Grudge message fell apart. Reports of a series of radar observations and visual UFO sightings went both to Project Grudge and to the Pentagon, where the Air Force director of Intelligence, not a member of the anti-UFO faction, asked for more details from ATIC.

ATIC sent two officers to inter- view some of the military witnesses, and they then flew directly to Washington to brief the brass. One of the interviewing officers was a competent young engineer recalled to active service and then assigned to Project Grudge. He “told it like it was” to a large meeting of Pentagon intelligence officers. Top brass was incensed that the project was moribund within ATIC, and the intelligence chief immediately ordered the competent young officer to revitalize it.

The competent young officer had just begun to get things moving when he was released from military service to return to his defense- related engineering project at Caltech. Knowing that Ruppelt, who was still in the Air Force, was also a competent engineer, the chief of ATIC’s aircrafts and missiles branch asked Ruppelt to take over Proj- ect Grudge, which he did.

Ruppelt had access to all of Project Sign and Project Grudge’s poorly archived records, which he and his staff of ten reorganized. From 1951 through much of 1953 he was responsible for the analysis of all military (including Army and Navy) UFO reports.

Regulations made it mandatory for all UFO sightings and observations to be directly reported to him by intelligence officers at every Air Force base, and he had carte blanche to visit Air Force bases to follow up on cases. After Ruppelt took over, the project got a new name—Project Blue Book.

Project Grudge/Blue Book Under Ruppelt
Project Grudge had hired a consulting astronomer, Dr. J. Allen Hynek, whose job was to aid in identifying the planets, stars, meteors, and other astronomical or meteorological events that were mistaken for UFOs. Ruppelt called in more scientific experts and contracted with the Battelle Memorial Institute, a private research firm in nearby Columbus, Ohio, to help categorize and evaluate the data.

He tried to set up ground recording systems and air-intercept scrambles at “hot spots”—areas that appeared to attract more than the average number of UFOs—but this was beyond his project’s priority level and nothing came of several attempts.

After discovering that Ruppelt could not handle press relations and do his job at the same time, the Pentagon assigned him a liaison officer and an information officer.

The first people who held those jobs were sympathetic to Ruppelt, his methods, and his goals. Minor administrative setbacks notwithstanding, Ruppelt thought that Project Blue Book was functioning well by the end of 1951. It was collecting data from all available sources, evaluating that data through the work of its own staff and the technical expertise available at ATIC, and, in Ruppelt’s own words, “sifting through the reams of data in search of the answers . . . required many hours of overtime work, but when a report came out with the final conclusion, ‘Unknown,’ we were sure that it was unknown.”16

1952: Washington, DC
UFO reports had peaked in July every year since systematic record- keeping had begun in 1947, and the year 1952 was a UFO turning point for the public and the government. The midsummer peak in 1952 broke all previous records. By June the number of cases had already attracted attention in the Pentagon, and Ruppelt was called to Washington to brief a high-level intelligence meeting.

He was criticized by some of those present for being too cautious in defin- ing Unknowns, and Ruppelt reports that there was support among some people at the meeting for accepting the ETH, stopping all public comment, turning Blue Book into a Top Secret project, and starting a serious effort to determine the operating characteristics and origin of the UFOs.

But the intelligence general in charge of the meeting restrained the enthusiasts and told Ruppelt that Blue Book was doing just fine as it was, while agreeing that the project should deploy ground-based photographic resources in order to get what every expert that Blue Book had consulted thought would be the most useful data: spectroscopic and position triangulation data on one UFO. Before the photographic project could get started (it never did), the meeting’s decisions were overtaken by the Washington flap.

On July 1 the Air Force’s Ground Observer Corps spotted two UFOs moving southwest above Boston, and jet fighters were sent up to intercept. A couple near Lynn, Massachusetts and, independently, an Air Force captain leaving home for work, saw the jets, looked up to see what they were chasing, and saw the two UFOs much higher than the jets, whose pilots reported that they could not spot the UFOs either by sight or on radar.

A few hours later, three instructors and twelve students in a radar class at Fort Monmouth, New Jersey, which is about 200 miles southwest of Boston, plotted two UFOs arriving from the northeast. The UFOs flew high but slowly, then loitered at about 50,000 feet before moving off to the southwest. Some of the students and one instructor went outside when the UFOs showed up on the radar and confirmed the radar plots by visual observation.

A few hours later, a crowd of people in downtown Washington, DC was looking up at something hovering northwest of the city. A physics professor saw the crowd looking up at a “dull, gray, smoky- colored” object, and called the Air Force. The flap was on.

Reports from across the country came so fast in July that Blue Book officers and staff worked fourteen hours a day, six days a week to deal with the American sightings in addition to filing (but not analyz- ing) the many foreign reports reaching ATIC. Sightings were reported from the Hanford, Washington plutonium processing plant, from Chicago, and from Blue Book’s home in Dayton, Ohio.

Ruppelt wrote that the proportion of Unknowns in July was up to 40 percent, much higher than the usual 10 to 15 percent remaining after misperceptions of airplanes, meteors, stars, planets, and atmospheric phenomena had been eliminated. Local Air Force intelligence officers swamped Blue Book with calls. They were told to send in only their most promising reports because Blue Book couldn’t keep up with the volume.

On the evening of Saturday, July 19, 1952, radars at Washington National Airport and nearby Andrews Air Force Base in Maryland tracked UFOs that flew slower than airplanes and then accelerated rapidly before coming back into radar and visual range. Airliner crews saw lights where the radars saw targets; jets were again scram- bled to intercept, but as usual the interceptor pilots could not see, photograph, or shoot at anything.

Ruppelt had returned to Dayton after his June meeting, but the Pentagon called him back to Washington, and on the morning of Monday, July 21, he again got off an airliner at Washington National Airport. Ruppelt picked up a newspaper and read press accounts saying that the Air Force “wouldn’t talk” about the Saturday sightings. No one had told the Air Force’s UFO officer—Ruppelt—about them.

There were Pentagon meetings that Monday morning and afternoon to decide what to do and say about the sightings. Ruppelt did not want to commit himself before investigating, so at about 4:00 p.m. that day the Air Force issued an official “no comment.” The generals running the meetings assumed that Ruppelt would stay on through Tuesday, visit the control towers, talk to the radar men, and write a report afterward.

Then began a classic snafu caused by the fact that Ruppelt was only a captain and the Air Force was only a bureaucracy. From 4:00 to 5:00 on Monday evening, Ruppelt tried to get a staff car from the Pentagon so he could make his control tower and radar center visits. Impossible: Pentagon staff cars were available only to colonels and above. He then tried to get Personnel to let him charge taxi fare as an expense. Impossible: he was told to take the bus. When he said his stops were miles apart and he didn’t know the bus system, he was told he could charge taxi fares to his nine-dollar-a-day per diem, which also included his hotel and meals.

He was also told that according to his travel document he should be on his way back to Dayton that night, and if he didn’t get the document amended or return to Dayton he would be technically AWOL. At this point Ruppelt wrote “If saucers were buzzing Pennsylvania Avenue information I couldn’t care less.”

So the captain in charge of the Air Force’s UFO investigation, who had spent the day at the Pentagon briefing colonels and generals about the unprecedented Washington, DC sightings, caught the next flight back to Dayton.

The Washington flap continued, and reports flooded in from across the country. Ruppelt returned to Washington the following week. While in Washington for the second time in July, Ruppelt got a call from President Truman’s Air Force aide who asked him to explain what was happening. Ruppelt said he didn’t know, but he couldn’t completely rule out “temperature inversions,” an atmospheric condition that sometimes bends radar waves sent skyward back to the ground so they reflect off moving cars and into the radar receiver, making the radar appear to be tracking mov- ing targets in the sky when it is really tracking moving cars on the ground.

Ruppelt knew that the radar experts who were on the scene during the Washington sightings had rejected that explana- tion, but he wanted to be cautious when passing information to the chief executive.

The Air Force held a press conference about the Washington sightings at the end of July. The general in charge repeated Ruppelt’s position that temperature inversions might have caused the sightings, and he was not questioned critically about the explana- tion. He said the Air Force was continuing its investigations, but the sightings did not constitute a threat to national security.

After a month of press excitement, the Air Force explanation was taken at face value by most but not all of the press present, and national newspaper accounts reflected fatigue with the UFO story.

The Pentagon’s instructions to Blue Book were to carry on as before.