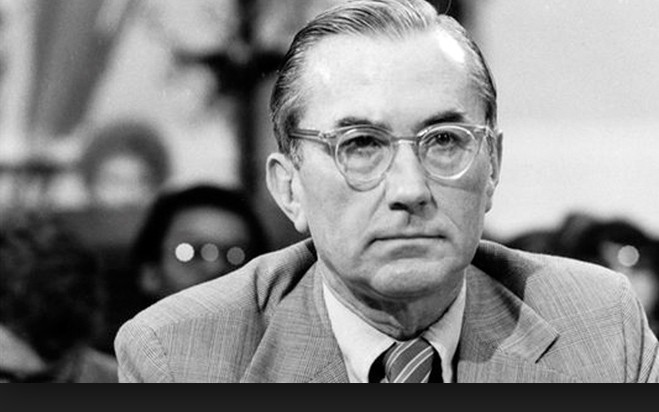 The former director of the CIA, William Colby was reported missing on April 27, 1996 after he had gone canoeing in front of his vacation home.

The search for Colby was a news item for the next week with specially trained dogs and rescue divers.

Then on May 6th, CNN reported, “The body of former CIA Director William Colby was recovered Monday morning about 20 yards from where his capsized, half-submerged canoe was found eight days ago.”

How on earth can team of rescuers take eight days to find a body that is 20 yards from the scene?

CNN explained it this way, “Authorities said they believe Colby’s body had been submerged where it was found, and it only recently rose to the surface.”

The base time period for a drowned body to float is 4 ½ days.

But even if Colby’s body was submerged for 8 days, how could a team of navy rescue divers and experienced searchers fail to find it?

What did the investigative journalists at CNN report regarding this unusual search and non-rescue?

That was the end of the story.

Perhaps a return to the beginning is in order.

To many of his colleagues in the intelligence community, William Colby was a traitor. Not to his country, but to his agency. 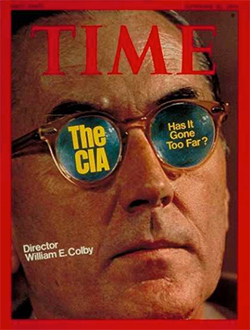 On May 9, 1975, Colby was called to testify to congress while still head of the CIA. That same day Henry Kissinger, Donald Rumsfeld, and others drafted a recommendation to prevent him from doing so.

But Colby had already decided to testify and did so 56 times. When Congress asked him a question, he answered it honestly. Agency insiders hated him for doing so, they thought it was his duty to lie.

Colby had been a reformer, and had emphasized the role of free speech and the moral role of the CIA as a defender, not preventer of civil rights.

But not everyone wanted reform.

In retirement Colby published his memoirs Honorable Men, was then sued for making unauthorized disclosures, and forced to pay $10,000 in an out-of-court settlement.

So William Colby was no friend to the agency he had once led. But whether or not he remained a threat to the agency status quo at the time of his death is another matter.

If Colby was in danger, he showed little sign of being concerned by it. An interviewer who visited him at home asked why the ex-director of the CIA didn’t have the latest locks on his doors and security cameras.

Colby replied that if anyone wanted to get him, they could do it, and he wasn’t going to live his life in constant worry.

But was there anything suspicious about his demise?

On the day Colby died, he spent the afternoon working on his sailboat at a nearby marina. When he got back home about 7 p.m. he called his wife, who was in Houston visiting her mother.

Colby told her that he was going to steam some clams for dinner, take a shower, and go to bed, because he tired from working on his sailboat all day.

A few minutes later, Colby’s neighbors saw him outside watering a tree, where he also spoke to his gardener and his sister. Afterwards he went back into his house.

The sun set 42 minutes later, and the official story is that Colby then went paddling his canoe and drowned.

When Colby spoke to his gardener, Joseph Wise, he made no mention of plans to go canoeing.

Neighbor Clyde Stokes remembered that the water was choppy the night Colby supposedly went canoeing, and was skeptical that he had done so.

Witnesses at the marina agreed that Colby had worked on his sailboat for at least 6 hours that afternoon, and that he did not putter around, replacing a shredded sail and a full cleaning from bow to stern.

Colby’s preparations for the sailing season would be in vain. 24 hours later he would be missing, presumed dead.

The next afternoon, Kevin Akers found Colby’s canoe while out boating with his family. Akers often found stray boats on his outings, but there was something different about Colby’s.

It was full of sand.

It took Akers and his wife nearly an hour to remove the sand, before they could tow the canoe back to the marina.

Akers had been out on the water the day before and not seen the canoe, and there was no way, he thought, that two tide cycles could put that much sand in it.

And there was something else odd about the stranded canoe. There was no sign of a paddle or life jacket anywhere in the vicinity.

Akers didn’t mention any of these oddities to anyone at the marina. He did not know William Colby and did not know that he was missing.

By 8 p.m., Colby’s neighbor Alice Stokes was worried enough to call 911. When policewoman Walsh came, she found both doors unlocked, both the computer and radio on, and no sign of foul play.

But neither officer Walsh nor any of the local police had any idea that Colby was a former CIA director – one with a lot of enemies.

If they had been, perhaps some suspicions would have been aroused by Colby’s dinner table.

Although Colby had worked all day, he hadn’t finished his meal, and his unfinished wine glass was found on the counter.

If Colby was tired and hungry from working all day, why had he suddenly decided to go canoeing?

The next morning a massive search effort and media circus began. A dozen navy divers, two helicopters, and all together a hundred searchers scoured the area.

Reporters wanted to talk to the man who had found the boat, but Kevin Akers didn’t want to talk to them. When Akers learned that the canoe’s owner was a former director of the CIA, Akers assumed that Colby had gotten whacked, and feared for his own life.

Boating accidents were common in the area, so the searchers knew what they were doing. Yet even working 24 hours a day, they couldn’t find Colby’s body.

Something else they couldn’t find was his life jacket. The search team found more than a dozen life jackets, but not Colby’s.

Nine days later, Colby’s body was found on the edge of the shore, looking like it had just been tossed in, not far from where the canoe was found. It was an area divers had searched numerous times.

The news media reported, “No sign of foul play in Colby case,” packed up and left town.

The Baltimore Sun added these remarks from marina owner Johnny Carter, “”Thank God they found him, otherwise there would have been conspiracy theories for thousands of years to come,” he said as he watched Colby’s 37-foot sloop rock gently in its slip. “It wasn’t a conspiracy at all.”

And where was Kevin Akers, the man who had found the canoe?

Colby’s body was found near a concrete pier, but his canoe was on the other side of a small peninsula. According to Akers, “It didn’t make any sense.”

How could Akers be so sure?

After pointing out the small peninsula he explained, “That’s where the current suddenly shifts and turns in a clockwise motion. All of us who live out here know these currents very well. My house is just down the road and I’m out on the water all the time. That clockwise current would have pushed the canoe back to the right, where they found the body. I don’t think the canoe could have made it around the spit to wash up where we are standing.”

Akers thought that whoever killed Colby had dumped his body in the water a week after he’d disappeared.

Akers theory appears to be supported by the autopsy photos.

The private investigator had seen them years before while visiting the medical examiner’s office.

When the private investigator saw the photos, who had seen dozens of drowned bodies while serving in Vietnam, he thought that Colby looked like he’d been in the water for 1 or 2 days—certainly not for a week or more.

When asked how that could be, the examiner guessed that the water was cold enough to slow the decomposition process. But daytime temperatures were well into the 70s and the water was nowhere near freezing.

The official story had been that Colby suffered a heart attack, but Colby had no history of heart problems, and was in good physical condition. He had after all, just worked on his sailboat all day.

When asked if there were any evidence the examiner replied, “Cause of death is often a judgment call by the M.D. who performs the autopsy.”

The examiner also added that they could not even prove that Colby had drowned.

When asked for a copy of the autopsy report, the examiner said, “It’s not ready yet.” And offered to fax a copy to the investigator the next day.

But the faxed report contradicted comments made by the examiner the day before.

1. Though the examiner and investigator both agreed that Colby “looked remarkably well” while viewing the autopsy photos, the report said his body was in an advanced state of decomposition.

2. In the interview, the examiner admitted that there was no specific evidence identifying the cause of death, but the report speculated that Colby had suffered a heart attack, fell into the water, then suffered from hypothermia, and then died from drowning.

3. The report says, “Identity confirmed by dental examination.” But Colby’s wife had no problem identifying her deceased husband. She did however have a very difficult time getting his dental records from the CIA.

4. The report concluded with the sentence that Colby had been “consuming alcoholic beverages,” suggesting that he had been drunk. But his blood alcohol level wasn’t high enough to get a DUI in Maryland or anywhere else.

It seemed to the investigator that the examiner was deliberately trying to make Colby’s death seem like an accident, although they had no hard evidence that that was the case.

When pressed, the examiner said, “We always try to make it as easy as possible for the victim’s families.”

Never let the truth get in the way of a nice story.

The many inconsistencies in Colby’s death have never been reported in the mainstream media. Perhaps it is only fitting, since William Colby himself once said,

“The CIA owns everyone of any significance in the major media.” 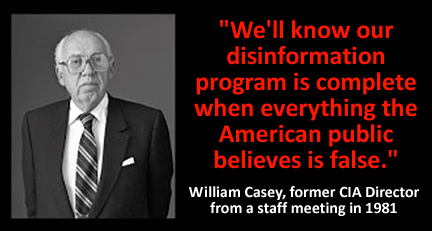 2 thoughts on “Who Killed William Colby?”