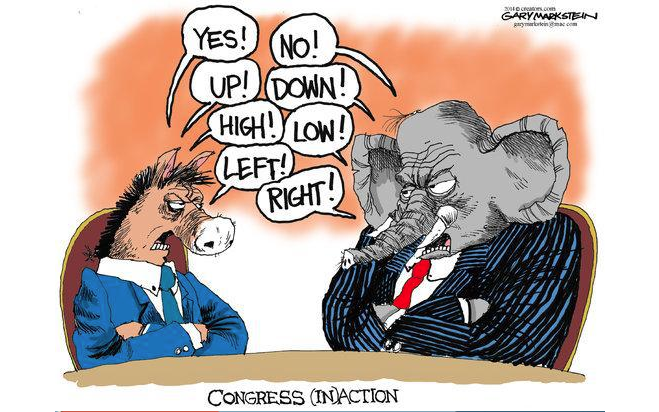 Some are despondent, while others are ecstatic over the results of Tuesday’s mid-term election.

Neither emotion is likely to be warranted. In all practicality, the difference between the parties is very small.

Democrats who fear that Republicans will cut their cherished social spending programs need not fret. Oh, they might slow the rate of increasing spending on a few, but actual cuts? No.

When it comes to spending, the separation between the parties is at most a few percentage points.

Republicans who think that Obamacare is going to be repealed are living in dream-land. At it’s core, Obamacare is a program that guarantees money to big corporations – corporations that make generous campaign contributions. Nope. Those gutless wonders won’t bite the hand that feeds.

Democrats who fear that abortion will be outlawed need not worry. For all the talk and bluster of pro-life conservatives, if they were actually going to do something other than bluster they would have done it when Bush was President and they controlled both houses. Wasn’t a legislative peep to be heard then, and there won’t be now.

As for Republicans who’ve been complaining about Federal abuses of power, spying on citizens, limits on free-speech, well… you can get used to more of the same. Neither Liberals nor Conservatives seem to like the Patriot Act, but politicians in both parties love it. More power for them, less power for you.

A lot of Democrats seem to think LGBT rights are the burning issue of our time. No that’s not a Bacon Lettuce and Tomato sandwich, that stands for Lesbian, Gay, Bisexual, and Transgender. Totally different kind of sandwich.

Anyways what’s the worst that can happen with social conservatives in charge? What are they going to do, pass a law that says marriage is between a man and a woman? Oh wait, that’s what the law already is.

Anyways, if the biggest problem you can find is that there are a few unmarried transsexuals out there who would like to get a tax break for filing their 1040s under the “married” category, maybe you’re not really paying attention.

As far as the economy goes, people totally over-represent the effect of politics. Oh sure, policies matter, but it can decades for their full effect to be seen, and the policies that matter ‘right now’ are controlled by the Federal Reserve – unelected stooges of the banking industry – not congress.

All that congress can do is spend, and Republican or Democrat, that’s just what they’ll do.

Democrats who fear ‘tax cuts’ for the rich fear in vain. The massive spending on social programs will continue even if the tax rate is 0%. Some wise-apple will probably say something like, “They have to cut your social security because rich people are taking all the money.”

But that’s a joke.

The money is all borrowed and it’s created out of thin air. There is ZERO chance of the money running out. The real problem is what will that money be worth when you go to spend it? Neither party is addressing that issue.

Nope. On the really big stuff that affects everyday life, not much is likely to change.

Besides, if you’re looking to Washington DC to improve you’re life, you are really looking too far. Try the mirror instead.

2 thoughts on “Thank Goodness for Gridlock”