October 17th, 2015
Why do Poor Schools Perform Better than Rich Ones? 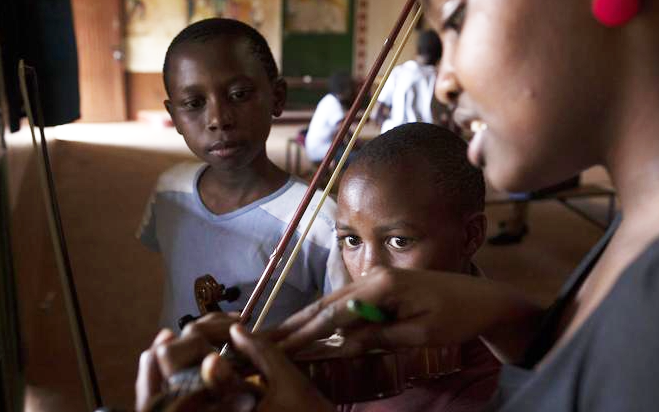 The problem was, there were far more students than violins.

To solve this problem, as well as to underscore her belief that every child is capable of learning to play the violin, Tzavaras decided to hold a lottery.

The first class, made up of the lottery winners, made surprisingly fast progress. So did the second, and the third. The program thrived and came to be called the Opus 118 Harlem Center for Strings.

Tzavaras and her students have performed at Carnegie Hall, at Lincoln Center, and on The Oprah Winfrey Show. Their success inspired a documentary film, Small Wonders, and a 1999 Hollywood movie called Music of the Heart.

Naturally, other public schools attempted to develop their own versions of Opus 118, among them two public schools: Wadleigh Secondary School of the Performing and Visual Arts in Harlem, and PS 233 in Flatbush, Brooklyn.

The two violin programs make a useful comparison because they started at about the same time and happened to be taught by the same instructor, David Burnett of the Harlem School for the Arts.

They also make a useful comparison because one of the programs succeeded and the other did not.

To predict beforehand which program would succeed might seem easy.

Wadleigh enjoyed numerous advantages over PS 233, including an arts-focused curriculum, parents who had, by enrolling their child, expressed a belief in the value of art education, students who presumably had a real interest in music, a brand-new auditorium, and a budget that permitted the school to purchase violins for every student who wanted to play.

PS 233, on the other hand, was an arche- typal urban public school. The students had no apparent inclination toward violins or arts in general.

What’s more, the foundation that funded the program could afford only fifty vi- olins, most of which were too small, forcing Burnett to hold an Opus 118—style lottery to determine who got in.

As the programs got under way, the result seemed preordained: Wadleigh would succeed, and PS 233 would fail.

The Wadleigh program was beset with discipline problems, and the PS 233 group was well behaved.

The Wadleigh students teased the good players and discouraged them from continuing, and the PS 233 students did their practice and got steadily better. When asked to explain, Burnett can only say that the Wadleigh program “just failed to take off.”

I believe part of the answer can be found in Small Wonders, the documentary film on Opus 118. Early in the film, its makers capture the scene of Tzavaras visiting a first-grade class to perform music and tell them about a group to which they might someday belong—if they are fortunate.

As she explains how the lottery works, the kids bounce up and down nervously; they clamor for applications to take home to their parents.

A week or two goes by; a sense of anticipation builds. Tzavaras returns to the classroom carrying a stack of winning applications.

Then, to rapt silence, she proceeds to announce the winners’ names.

On hearing their names, the kids react as if they’d just received an electric shock. They dance. They scream. They flail their arms in joy. They race home to tell their parents the thrilling news: they won!

They don’t know the A string from the A train, but it doesn’t matter in the least, they are ignited, and it makes all the difference.

If talent is a gift sprinkled randomly through the world’s children, we would naturally expect Wadleigh’s program to be the one to succeed.

But if talent is a process that can be ignited by primal cues, then the reason for PS 233’s success is clear.

The genetic potential in both schools was the same; the teaching was the same; the difference was, the students at Wadleigh received the motivational equivalent of a gentle nudge, while the PS 233 students were ignited by primal cues of scarcity and belonging.

In each case the kids reacted the same way any of us would.

Ignition doesn’t follow normal rules because it’s not designed to follow rules. It’s designed only to work, to give us energy for whatever tasks we choose.

Do schools need more money? Or do they need something else?