I recently returned from a pool vacation in Thailand and thought I’d share my findings for anyone who might be interested in doing the same. Although Thailand does not have the number of elite pool players as say, the Philippines or Taiwan, it’s still a great place to play.

For a moderately skilled player like myself, it’s a perfect match. The two cities in Thailand I recommend for pool players are Bangkok and Pattaya. This page will cover Bangkok, playing pool in Pattaya covered here.

Along a 2-mile stretch of Sukhumvit road, you can find 4 pool halls, 9 pool bars, a snooker club, a 3-cushion billiards club, and dozens of bars with a pool table of some sort. 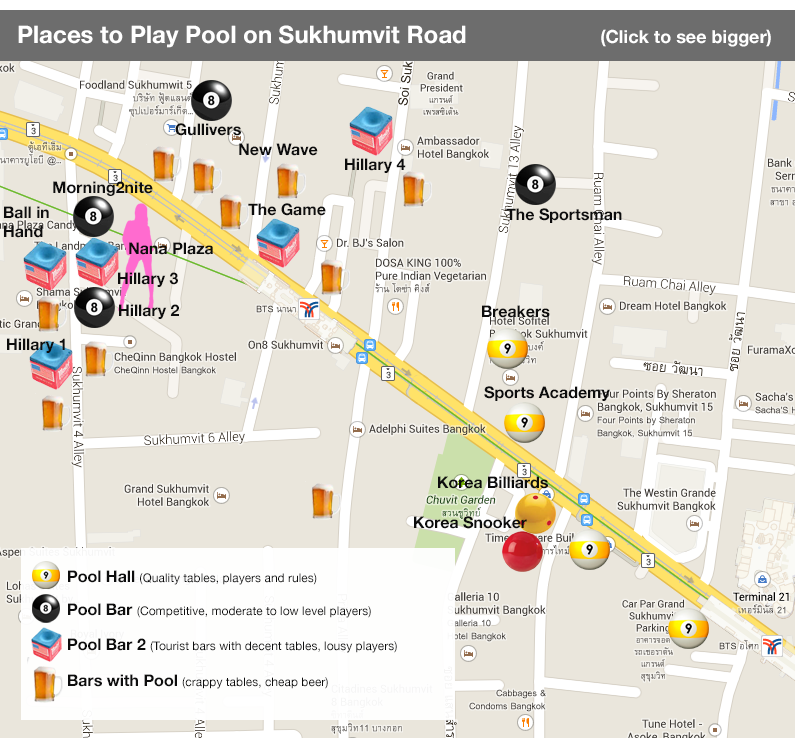 Pool halls play international rules (touching a ball is a foul) tend to play 9-ball and 10-ball, and are hangouts for serious players.

Hustlers
If you’re looking for a challenge, this is the place. About a dozen Brunswick Tournament Tables. Weekly 9-ball and 10-ball competitions and frequent gambling in between. Favorite hang-out for expats and serious pool players, also half price practice time during the day.

Oh, and nevermind deciding whether winner or loser racks, in Hustlers there are girls in mini-skirts who will rack the balls for you at the end of each game. This is standard operating procedure at just about every pool hall in the country. True story. 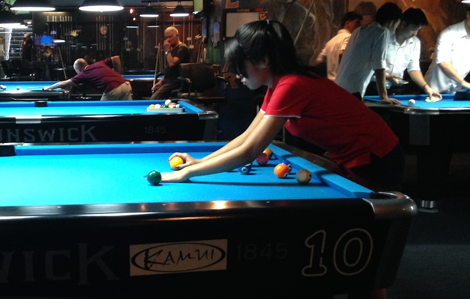 UPDATE: The Sportsman
Previously we had put The Sportsman under the “Bar” category, but unknown to us at the time there is an upstairs with a dozen well maintained Brunswick Gold Crowns, frequent tournaments, and many strong players. And if you wanted to watch some sporting event, chances are very good its on one of the many TVs. 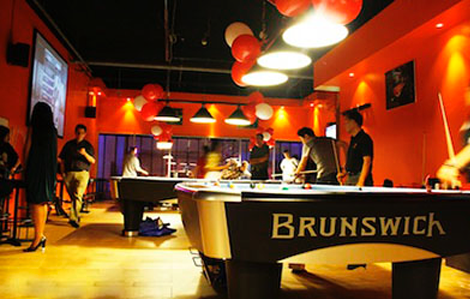 The Players
Hidden in a little alley right by the Asoke Train station. 5 Metro tournament tables, half price until 7pm. Not sure how active it is at night, only played there during the day. Was told that they have regular 9-ball tournaments. 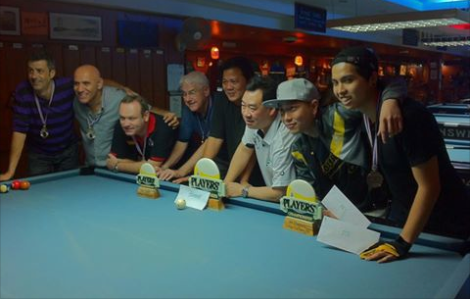 Sports Academy
4 Brunswick tables downstairs and more upstairs. Was invited to come play in some “money games” in the evening, but only played there during the day, so couldn’t say how serious it gets. Has a 10-Ball tournament every Thursday. Late at night, the street in front of this place is a popular hangout for ladies-of-the-evening, and other weirdos. 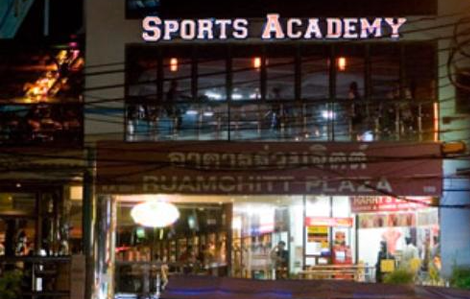 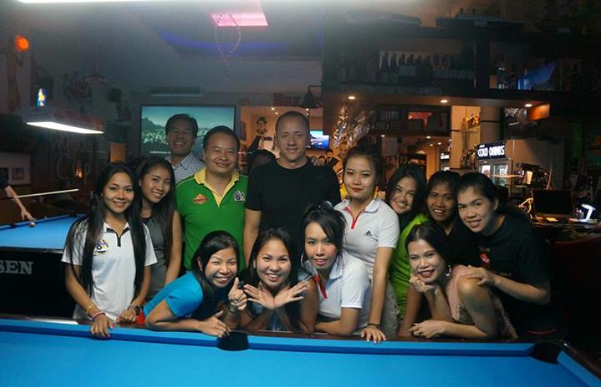 Korea Town Snooker & 3-Cushion
Up on the second and third floors of this Korean mall are a snooker club and a 3-cushion club. I wandered into the 3-cushion place and it was pretty comical trying to convince the Korean guys who worked there (and spoke no English) that I really wanted to play carom. Didn’t look into the Snooker club, but it is there. 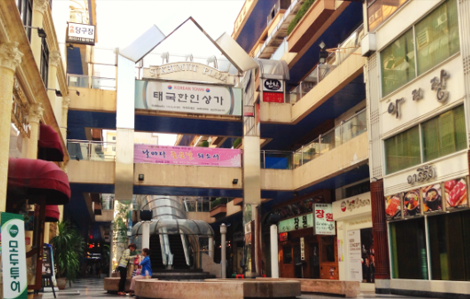 Most Thai men play snooker, not pool, and there are numerous snooker clubs around town, some just a short taxi ride away.

Many professional snooker players reside in Bangkok, so I’m guessing strong games could be found. I meant to check some out, but like I said, I’m not that good, and I was already having too much fun playing in the bars…

Where playing pool is the primary activity of a pool hall, drinking is the main function of a pool ‘bar.’ And thus the players are more likely to be random tourists, drunks, and bar girls, rather than serious students of the game.

Also, the rules can and do change from place to place, or even from night to night. In Bangkok, it is generally ball-in-hand for a foul, but failure to contact a rail is not a foul, nor are scoop shots, or double hits. Some places count lucky shots, some don’t. Some count sinking an opponent’s ball as a foul. And some places use “Thai rules,” but more on that when I cover playing pool in Pattaya.

Also, many of these bars are located in red-light districts, so if you are traveling with your wife or girlfriend that may or may not be a problem.

Morning2Nite
The key activity here is drinking, but it has a very lively pool scene as well with three 8-foot Brunswick tables, and a winner stays/loser pays format. Just put your name up on the white board and wait your turn to challenge. Loser gets 20 baht added to their bill (about 75 cents). Mostly bar players from around the world, with the occasional local hotshot showing up to beat up on the tourists. 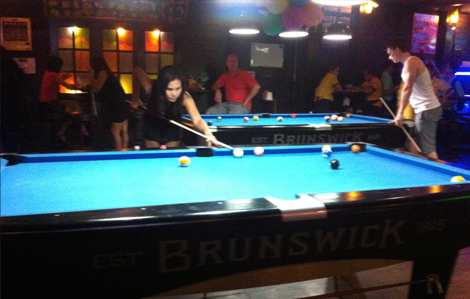 Hillary Bar 2
A really good live band, two 7-foot Brunswick tables, and an oddball mix of pool players including expats, drunks, bargirls, transvestites, and some pretty decent players. Think of it as the Star Wars bar plus pool. A good time will be had. Loser pays 40 baht. Has a very long waiting list to play unless you get there early. 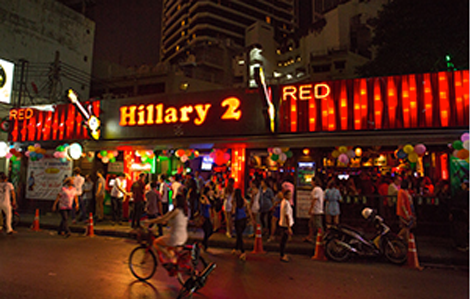 Hillary Bar 4
Two 7-foot Brunswicks, DJ playing club tunes, tends to be weaker players, but usually a short list to get at the table and loser pays 20 baht. Has numerous semi-attractive hostess girls who will pester you to buy them a drink. Up to you.

Ball in Hand
This used to be the premier pool hall in Bangkok, but to be quite honest I’m not sure if it is there anymore as the area seems to have been taken over by Middle Easterners. 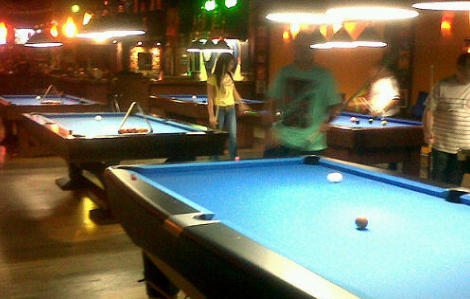 Gulliver’s
This place feels like an American Chain restaurant. Two undersized not quite level tables, but with plenty of players signed up to challenge. Popular with South Asians and Middle Easterners. 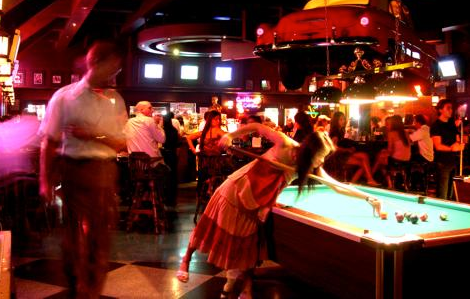 The Game
Mostly a sports bar, two Brunswicks downstairs and third upstairs. Casual players and people watching ‘football’ on the telly though. 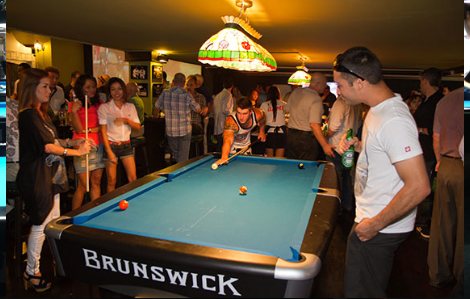 Did I mention that Bangkok is a good place to play pool?

And there are many more bars and snooker clubs around.

Note: many of the pool bars listed are in the red-light district clustered around Nana Plaza. There is also a small pool bar at the corner of the other red-light street Soi Cowboy, but not much of a game to be found there. The Pool Halls are in more PG neighborhoods.

Want to give it a shot? Here are the Hotels I Recommend in Bangkok, something for all budgets.

Bangkok not enough? Then check out Playing Pool in Pattaya…

1. Does anyone actually know what happened with the...